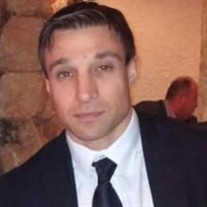 George Nikolas Grillakis, 43, of Nashua, NH, passed away unexpectedly on Wednesday, October 13th. He was born January 6, 1978 in Athens, Greece, son of Nikolas and Roula  (Makkas) Grillakis of Nashua.  George was a graduate of  Nashua High School. He spent many years working as an HVAC Technician and also worked in the food service industry at his family’s business, Buds Restaurant. George was an avid outdoorsman. He loved fishing, camping, hunting, hiking and exploring. He loved snowboarding the mountains of New England. He loved to travel to lakes and beaches, especially to Greece, where he served in their military. He spent time living on his native island of Crete, as well as coastal Florida.  George was a sports enthusiast. He was a devoted fan of Athens soccer team, AEK, as well as all of the New England sports teams. His proudest moments were coaching his younger brother on the wrestling mat, which eventually led to an undefeated season and watching his brother become an All American. He was so proud. George will be deeply missed by his family and friends who will treasure the memory of his free spirit and adventurous nature. Besides his loving parents, George is survived by a daughter Alexandra Grillakis of Lottsburg VA, a significant other Samantha Yother of Florida, a brother Paul Grillakis and his wife Molly, and their children, Niko and Marina, all of Hollis NH, a brother Michael Grillakis and his significant other Kristen Millett of Manchester, NH, Uncle Fotios Makkas of Nashua, Uncle Steve and Aunt Bessie Gryllakis of CT, as well as many aunts, uncles, cousins , nieces and nephews in Greece.  Visiting hours will be held on Monday, October 18th from 9am -11am in the Dumont-Sullivan Funeral Home, 50 Ferry St., in Hudson. A Graveside Service will immediately follow in Evergreen Cemetery in Nashua.

George Nikolas Grillakis, 43, of Nashua, NH, passed away unexpectedly on Wednesday, October 13th. He was born January 6, 1978 in Athens, Greece, son of Nikolas and Roula  (Makkas) Grillakis of Nashua.  George was a graduate of  Nashua High... View Obituary & Service Information

The family of George Nikolas Grillakis created this Life Tributes page to make it easy to share your memories.