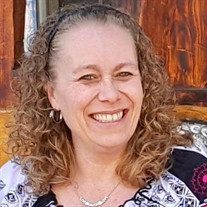 Gail Ann (DiAntonio) Robinson of Merrimack NH, died suddenly at Concord Hospital on March 2, 2021. Born on June 26th, 1971, Gail was the beloved daughter of Andrew and Gayle (Lyon) DiAntonio of Hudson, NH. Gail grew up in Hudson NH and was a Class of 1989 Graduate of Alvirne High School. After graduation Gail pursued a successful career in the banking industry working for BayBank, Bank of America and Citizen’s Bank. After her career in the banking industry Gail found her love outside of corporate America working in the embroidery industry at Embroide Me of Bedford and Brine in Concord, NH. Gail married Kevin J. Robinson on February 14th, 1997. Gail’s greatest accomplishment and life’s work was being a mother to her only son Derek James born on December 1, 2001. Gail was a kind, fantastic, supportive and loving mother, always handling life with ease and grace. Gail was a wonderful woman, wife, mother, sister, daughter, and friend that anyone could ask for. Her smile, energy, optimism and compassion were contagious to anybody she met. Her genuine love of life would light up any room. She most enjoyed spending her time with family and friends. Gail was predeceased by her husband Kevin Robinson, who died in April of 2019. Gail is survived by her son Derek James Robinson of Merrimack, NH. Her parents Andrew and Gayle DiAntonio of Hudson, NH, a sister, Sharon (DiAntonio) Borkush and husband David of Concord, NH, Brother Jeffrey DiAntonio, of Hudson, NH. Her niece and nephew Kaitlyn and Jackson Borkush of Concord, NH, Niece Desiree Robinson, of Hudson, NH, Nephew Ryan Dussault of Hudson, NH and great nephew Christopher Robinson-Heapes of Hudson, NH, Father-in- law John B. and wife Patricia Robinson, of Merrimack, NH, Brother-in-law Karl J. Robinson and wife Michele of Nashua, NH, Brother-in-law Fred Dussault and wife Diane, Sister-in-law Laurie J. Robinson of Hudson, NH and Bother in law John C. Robinson and his wife Stephanie Robinson also of Hudson, NH, Sister-in-law Audrey Dussault and wife Anjie of Nashua, NH. A Walk Through Visitation will be held on Tuesday, March 9th from 4pm - 6pm in the Dumont-Sullivan Funeral Home, 50 Ferry St., in Hudson. Friends and family who are attending are asked to please wear masks or facial coverings and to follow the social distancing guidelines in place.

The family of Gail Ann Robinson created this Life Tributes page to make it easy to share your memories.