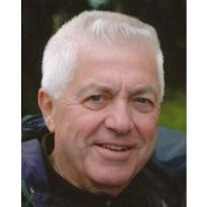 Francis A. Colburn, “Frank”, 73 of Hudson, NH, died Sunday December 27, 2009 at Lahey Clinic in Burlington, MA surrounded by his loving family. He was born May 24, 1936 in Haverhill, MA, son of the late Frank and Gertrude (Lees) Colburn. Mr. Colburn was the husband of Mary Ellen (O’Neill) Colburn of Hudson with whom he shared 53 years of marriage. He was an Army Veteran and received an Associate’s degree and a Bachelors Degree from Bentley College as well as a Masters Degree from Northeastern University. A resident of Hudson since 1966, Frank coached recreational basketball and baseball. He was an avid golfer who enjoyed wintering in Florida and taking family cruises. He loved spending time with his family, especially his grandchildren. Besides his loving wife Mary Ellen, survivors include three sons and a daughter in law; Michael Colburn of Hudson, Stephen Colburn of Taunton, MA, Kevin and Kristine Colburn of Hudson. Five daughters and five sons in law; Lynn and Richard Gendron of Nashua, Susan and Michael LaRocque of Nashua, Jane and Daniel Clarke, Sr. of Hudson, Brenda and Nils Wygant of Nashua, Donna and Rusty Smith of Nashua. As well as 19 grandchildren; Randy, Donny, Bradley, Alizah, Harper May, Sidney, Jonathan, Amie, Andrea, James, Michelle, Christine, Daniel, Jr., Kayla, Colby, Rileigh, Braedon, Cohen, and Meredith. A brother; and a sister in law; Robert and Janet Colburn of Billerica, MA. A sister and a brother in law; Patricia and Arthur Howes of Haverhill, MA. As well as several nieces, nephews, and cousins. Visiting Hours will be on Wed. Dec. 30th from 4-8pm in the DUMONT-SULLIVAN FUNERAL HOME, 50 FERRY ST. IN HUDSON. A Funeral Mass will be celebrated on Thurs. Dec. 31st at 10am in Blessed John XXIII Parish at St. John the Evangelist Church, 27 Library St., in Hudson. All May Meet At Church. Burial will be in St. Patrick Cemetery in Hudson.

Francis A. Colburn, “Frank”, 73 of Hudson, NH, died Sunday December 27, 2009 at Lahey Clinic in Burlington, MA surrounded by his loving family. He was born May 24, 1936 in Haverhill, MA, son of the late Frank and Gertrude (Lees) Colburn.... View Obituary & Service Information

The family of Francis "Frank" Colburn created this Life Tributes page to make it easy to share your memories.