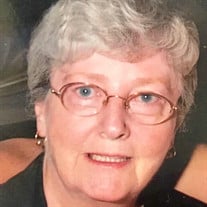 F. Carleen Trudeau, 83, of Nashua, died Monday, May 21, 2018 at her home surrounded by her loving family. She was born February 3, 1935 in Manchester, NH, daughter of the late Patrick and Arvesta (Eldridge) McQueeney. Carleen was predeceased by her husband, Ronald Trudeau, in 2017. She was also predeceased by son, Robbie John Trudeau in 1984, two brothers, Patrick McQueeney and Eddie McQueeney as well as by two sisters, Catherine Kelly and Marilyn McQueeney. Carleen was a devote Catholic who followed her faith and lived for helping others. She was charitable, not just financially but with the gift of time. Carleen repeatedly opened her home to those in need and her table for those who needed a meal. She was the definition of selfless. She enjoyed long walks on the beach, playing the organ or guitar, drawing, solving any kind of puzzle you put in front of her, and knitting items to be given out as gifts. She was an avid reader who loved to spend time with her family. Carleen will be greatly missed by her loving family and all that knew her. Survivors include two daughters, Laurie Dufour and her husband Robert of Merrimack, NH, Patrice Conley and her husband Paul of Nashua, a son, Ron Trudeau and his wife Sandy of Nashua, a sister whom she raised like her own daughter, Sharon Tyler and her husband Patrick of Hollis, NH, seven grandchildren, Maura Sherman, Robert Dufour, Christopher Dufour, John Conley, Nicholas Conley, Cameron Trudeau, and Danielle Trudeau, four great grandchildren, Lyla, Adria, Mayson, and Makenzie, also many nieces and nephews. A Mass of Christian Burial will be held on Friday, May 25th at 9:30am in St. Patrick Church, 29 Spring St., in Nashua. All may please meet at church. Burial will follow in St. Patrick Cemetery in Hudson. In lieu of flowers the family encourages donations be made in Carleen’s loving memory to Nashua Soup Kitchen & Shelter, PO Box 3116, Nashua, NH 03061. Any flowers of expression may be delivered directly to the church in time for Mass.

F. Carleen Trudeau, 83, of Nashua, died Monday, May 21, 2018 at her home surrounded by her loving family. She was born February 3, 1935 in Manchester, NH, daughter of the late Patrick and Arvesta (Eldridge) McQueeney. Carleen was predeceased... View Obituary & Service Information

The family of F. Carleen Trudeau created this Life Tributes page to make it easy to share your memories.