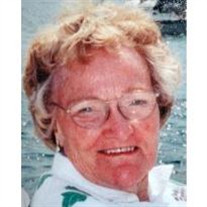 Ethel (Watkins) Bilodeau Nadeau; 87, of Nashua, NH, loving wife of Norman A. Nadeau, passed away on, March 23, 2009 at the Community Hospice House, Merrimack, NH after a long and valiant battle with cancer. Born on October 12, 1921 in Nashua, NH, Ethel was the daughter of the late Herman and Mildred (Caldwell) Watkins. Ethel was an avid golfer. As a former member of the Nashua Country Club she was a leader in the women’s golf league, a proud champion of the Dr. Fairfield Memorial Tournament, and at one time a team member of the “Fearsome Foursome” representing the state of NH at the American Cancer Society’s Doral National Golf Championship in Florida. Ethel was devoted to her husband and family. She was known for her beautiful home and gardens, her creative knitting and crewel work, and for many years acted as the manager and head stitcher of JAMAK Interiors for her daughter. She will also be remembered for her work in the medical office of her friend, Dr. Marion Fairfield, in earlier years. Ethel and Norman were happily married for almost 60 years and would have celebrated their anniversary on May 14th. She will be tenderly remembered by her children Thomas Bilodeau and wife Jackie of Hampton, NH; Janice Spry of Nashua, NH; Mark Nadeau and wife Luanne of Haymarket, Va.; and twin sons, Kevin Nadeau and wife Sheila of Nashua, NH; Keith Nadeau and wife Peggy of Nashua, NH. Eleven grandchildren, eleven great grand-children, and a great great grandchild will treasure their memories of “Grammie”. She is survived by two sisters; Dorothy Theriault Lieto of Flagler Beach, Fla. and Marion Jorde of Las Vegas, Nevada. As well as several dear nieces and nephews. She is pre-deceased by one sister, Florence, and her first husband, Henry Bilodeau, who was killed in action during World War II. A private service for immediate family only will be held at the NH State Veterans Cemetery in Boscawen, NH. For those who would like to join the family, a mass of intention will be offered at 8am on Sunday, April 19, 2009, in St. Joseph’s Church, 777 West Hollis St. in Nashua. An anniversary remembrance in memory of “Teddie” will be included in a mass said next year in St. Patrick’s Church, 29 Spring St., Nashua on March 23, 2010 at 12:00 noon. In lieu of flowers, those planning an expression of sympathy may make a memorial donation in her name to Home Health & Hospice Care, Attn. Community Hospice House, 22 Prospect St., Nashua, NH 03060.

Ethel (Watkins) Bilodeau Nadeau; 87, of Nashua, NH, loving wife of Norman A. Nadeau, passed away on, March 23, 2009 at the Community Hospice House, Merrimack, NH after a long and valiant battle with cancer. Born on October 12, 1921 in Nashua,... View Obituary & Service Information

The family of Ethel Bilodeau Nadeau created this Life Tributes page to make it easy to share your memories.