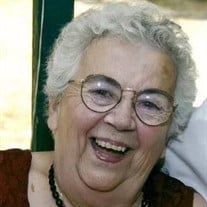 Esther B McGraw, 85, died on December 16, 2017 at the Hillsborough County Nursing Home Goffstown, NH. She was born in Hudson, NH on March 27, 1932 daughter of the late Miles and Helen Ruiter. Esther’s heart belonged to the town of Hudson, being the only place she ever lived, she lived within five miles from where she was born and loved living at the top of Kimball Hill Road her favorite place on earth. Esther was very proud to have been in the first graduating class of Alvirne High School in 1950. And also she was honored when she was chosen citizen of the year in 2004 for Hudson. She loved being involved in many of the towns committees. Serving on the supervisors of the checklist for over thirty years and wearing many different hats depending on what was needed at each election, and being one of the Chairwomen of the Historical Society which she loved. She had an amazing amount of fun working on Olde Home Days, and fundraising events and giving the popular tours at the Hill house which she knew inside out. One of the closest things to her heart was the Benson’s Project, having worked there as a kid and as an adult she was so proud of how the park turned out and that the town would continue to enjoy the tranquil atmosphere that lives on. She was predeceased by her loving husband of 56 years Richard E. McGraw and is survived by her three children, Ellen Nolen and husband Bill of Sunapee, NH, Michael McGraw and wife Gail of Alexandria, VA and Georgia Drew and husband Mark of Goffstown, NH; Eight Grandchildren, Danny, Kelly, Joshua and Sarah McGraw, Dale and Travis Roy, Adam and Liza Drew, and Heather, Tyler, Amy, Katie and Geoff Daley; Six great Grandchildren, Rowan, Hunter, Gemma, Zeke, Eden, Emma and many other dear family and friends. Visiting Hours will be held on January 6th from 10am - 11:30am in the Dumont-Sullivan Funeral Home, 50 Ferry St., Hudson with a brief prayer service being conducted from 11:30am till noon in the Funeral Home. In lieu of flowers, the family has requested that donations be made to Hudson Historical Society, P.O. Box 475, Hudson, NH 03051.

Esther B McGraw, 85, died on December 16, 2017 at the Hillsborough County Nursing Home Goffstown, NH. She was born in Hudson, NH on March 27, 1932 daughter of the late Miles and Helen Ruiter. Esther&#8217;s heart belonged to the town of Hudson,... View Obituary & Service Information

The family of Esther McGraw created this Life Tributes page to make it easy to share your memories.