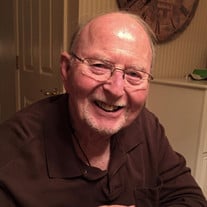 Emil Carl Birnstein Jr. of Hudson, NH, died January 23, 2018 at the age of 86 after a long brave battle with Parkinson’s disease. He is survived by his wife Barbara and his three daughters, Andrea Gallagher, Carla Johnson and Paula Schwear, their spouses, as well as his grandchildren Kayla Ziegwied, Tanner Johnson, Samantha Schwear and Max Schwear. He proudly served in the Korean War, as a naval submarine electrician. In 1957 he married the love of his life Barbara Brenner. On September 14, 2017 they celebrated their 60th wedding anniversary. Emil spent the majority of his career working for GTE Sylvania as a lighting engineer. He was most happy talking about incandescent and tungsten halogen lightbulbs. Emil had a wonderfully creative side. He made nail sculptures that were used as awards for one year’s Special Winter Olympics. He enjoyed drawing, woodworking, poetry, calligraphy and making metal lanterns. He was a tremendously giving and principled man. He served as a Director on the Board of the Salem Boys Club. In 1977 he ran for town Selectman. He read his daughters the children’s bible on Sunday mornings and taught them many life lessons about doing right. He loved Cape Cod, where he and his wife Barbara retired and both of them volunteered at Nickerson State Park and on the Cape Cod Bike Trail. During summers they piled their children and grandchildren into the bed of their truck to enjoy days at Skaket Beach. Emil enjoyed swimming in Flax Pond and going on walks in the woods with his wife and children. For a period of time, at age 85, he held the world record as the Oldest Ring Bearer, at his granddaughter Kayla’s wedding. https://recordsetter.com/world-record/oldest-ring-bearer/51305 Emil, who was called Bubbles by those close to him, was diagnosed with Parkinson’s 20 years ago. With the expert care of his wife Barbara and his daughter Carla, he enjoyed life (and his favorite homemade foods) until the last week of his life. His hope was to find a cure for this terrible disease in his lifetime. In lieu of flowers, the family would like your support of the Michael J. Fox Foundation https://www.michaeljfox.org/ so that we can find a cure. A celebration of life will be held this spring/summer. Check back to this site for details.

Emil Carl Birnstein Jr. of Hudson, NH, died January 23, 2018 at the age of 86 after a long brave battle with Parkinson&#8217;s disease. He is survived by his wife Barbara and his three daughters, Andrea Gallagher, Carla Johnson and Paula Schwear,... View Obituary & Service Information

The family of Emil Carl Birnstein Jr. created this Life Tributes page to make it easy to share your memories.