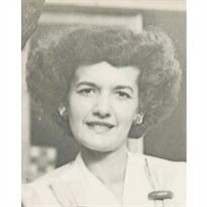 Eleanore Joan Bujold, 93, widow of Rèal L. Bujold, died peacefully Feb. 21 at the Courville of Nashua after a lengthy illness. Born in Lawrence, Mass., daughter of Rachael and Joseph Desbiens, she was a graduate of Lawrence High School and Roberts College of Lewiston, Maine. She moved to Nashua during WWII, where she was active with the USO while working at the Carroll Cut Rate Store. She married Rèal, then a Corporal in the US Army Air Corps, while he was home on leave from the Pacific Theatre in March of 1945. After his brief additional military assignment in Little Rock, Arkansas, the couple returned to make their home in Hudson. During WWII and for a time afterwards, she was also a volunteer at the coffee shop in Memorial Hospital, now Southern NH Regional Medical Center. Eleanore returned to work at Wingate's Pharmacy in the late fifties; then began her lengthy career starting as a clerk in 1965 with the Nashua Registry of Deeds. She was soon named Deputy Register of Deeds and remained in that position for many years until her retirement in June of 1980. The couple eventually moved to Port Charlotte, Florida; and stayed there for almost 10 years, until her husband's death in 1997. Eleanore soon returned to Nashua, to be near her two children, grandchildren and other relatives. She enjoyed cooking, reading and traveling. Her many travels took her to Canada, the British Isles, France, Bermuda, Turkey and Germany. In addition to her husband, Eleanore was pre-deceased by two sisters: Corinne and Aurora; a brother, Joseph Desbiens; and her son-in-law, Capt. R. Neil Hansen, USAF. Eleanore is survived by her daughter, Michele Bujold Hansen of Nashua; her son, Karl W. Bujold of Hampton, NH; a grandson, Christopher Bujold of Nashua; another grandson and his wife, Lt. Commander Karl A. Hansen, USCG and Jessamyn Wendell of Belleville, Michigan; three great-grandchildren: Conaire, Teague and Honora Hansen, all of Michigan; a niece, Virginia Westwater of North Carolina, and several cousins. Additionally, she is survived by six sisters-in-law: Rita Carignan of Manchester, NH; Andree Bentley and Aline O'Neill, both of California; Pearl Lajeunesse of Sherbrooke, Canada; Noella Chretien of Virginia and Evlyn Kavanagh of British Columbia, Canada. At her specific request, there will be no viewing or funeral services. For those who wish, donations can be made in her memory to the National Wildlife Federation, 11100 Wildlife Center Drive, Reston, VA. 20190. A private family burial will take place in the spring at the family plot in St. Patrick's Cemetery in Hudson, NH.

Eleanore Joan Bujold, 93, widow of Rèal L. Bujold, died peacefully Feb. 21 at the Courville of Nashua after a lengthy illness. Born in Lawrence, Mass., daughter of Rachael and Joseph Desbiens, she was a graduate of Lawrence High School and... View Obituary & Service Information

The family of Eleanore Bujold created this Life Tributes page to make it easy to share your memories.