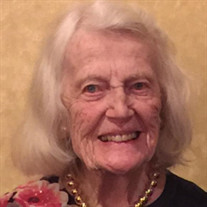 Eleanor Louise Whitaker (nee Böthel) – August 17, 1926 – February 5, 2020 Eleanor Whitaker died at home, surrounded by family, on February 5, 2020 after a brief illness. Eleanor and Norman, her loving husband of 65 years, moved to Nashua in 1955, and then to Hudson in 1958. Eleanor was an enthusiastic and devoted mother of five, grandmother of thirteen, and great-grandmother of three. Young Eleanor’s love of reading became a lifelong passion for learning. She was a strong advocate for public school education. Her leadership inspired all of her children and grandchildren to attend college. Her keen interest in education inspired others, and is reflected in the number of teachers, doctors, engineers, musicians and other problem solvers among her offspring. Her influence lives on and she will never be forgotten. Eleanor was born in Portland, Maine and raised in South Portland and Cape Elizabeth by her parents, Herman Böthel and Marjorie Böthel (nee Peabbles). She graduated at the top of her Cape Elizabeth High School class in 1943. She was not recognized as Valedictorian, as that honor was reserved for the highest-ranking male. Upon graduation, Eleanor worked at the telephone company. She left work to care for her mother Marjorie, who died in 1953 of ALS. Following her mother’s death, Eleanor worked at Maine’s WCSH Radio and TV station as the commercial content coordinator. There she met, fell in love, and married Norm, who was a broadcast engineer. As avid walkers, Norm and Eleanor became a fixture in Hudson, where they hailed friendly neighbors and Eleanor appreciated flower gardens along their route. Her lifelong love of flowers was reflected in her beautiful gardens and her deep horticultural knowledge made her a source of advice and inspiration. Eleanor was deeply loved and will be missed by her husband of 65 years, Norman, her daughter and son-in-law Nancy and James Hile of Deerfield IL, and three sons and their wives: Norman and Mari Whitaker of Bellevue WA, Kenneth and Frances Whitaker of Manchester NH, and Andrew and Kathy Whitaker of Hollis NH. She was predeceased by beloved son Eric. A reception of remembrance for family and friends will be held at the Dumont-Sullivan Funeral Home, 50 Ferry Street, Hudson, NH on Monday, February 10th from 11:30am – 2:00pm. Donations in Eleanor’s memory may be made to the ALS Therapy Development Institute at www.als.net or at (617) 441-7200 or End Brain Cancer at www.endbraincancer.org or at (425) 444-2215.

The family of Eleanor Whitaker created this Life Tributes page to make it easy to share your memories.