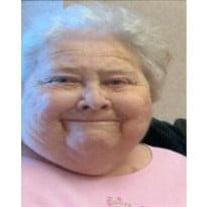 Eleanor Crowley, 77 of Nashua, died Friday September 12, 2008 at the Southern NH Medical Center in Nashua, NH. She was born November 7, 1930 in Boston, MA daughter of the late John J. and Anna G. (Smith) Crowley. She was also predeceased by a brother; John Crowley and a sister; Phyllis Werner. Eleanor was the wife of James Crowley of Nashua and they resided in Billerica, MA for 34 years prior to moving to Nashua. Besides her loving husband , survivors include two sons; James A Crowley, Jr. of Bennington, VT, Mark E. Crowley of Nashua. Two daughters and two sons in law; Mary and John R. Lewis of Silver Springs, MD, Ellen A. and James DeAngelis of Ashburnham, MA. Six grandchildren; Sean, Jaclyn, Katie, Nicole, Sara, and Kelsey. As well as three great grandchildren; Angel, Camara, and Creighton. Also a sister and a brother in law; Ann and William Flood of New Bern, NC. As well as several nieces and nephews. Visiting Hours will be on Tues. Sept. 16th from 6pm – 8pm in the DUMONT-SULLIVAN FUNERAL HOME, 50 FERRY ST. IN HUDSON. A Funeral Mass will be celebrated on Wed. Sept. 17th at 10am in St. Joseph the Worker Parish, 777 West Hollis St., in Nashua. All May Meet At Church. Burial will be in the Mass. Veteran Memorial Cemetery in Winchendon, MA at 1pm.

The family of Eleanor Crowley created this Life Tributes page to make it easy to share your memories.