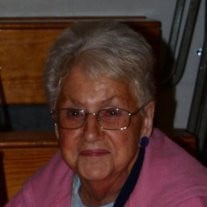 Eileen Rita (Corbett) Mullett, 80 of Hudson, NH, died Sunday April 21, 2013 at Lahey Clinic in Burlington, MA following a brief illness. She was born September 10, 1932 in Malden, MA daughter of the late Francis and Margaret (Reardon) Corbett. Eileen was predeceased by her husband, Donald Mullett in 2002 as well as by her son Daniel Mullett in 2010. She was also predeceased by four sisters and two brothers. Eileen was an RN for over 50 years and was employed with various hospitals and nursing homes in Massachusetts and also provided in home care. She found her greatest joy when spending time with her two grandsons and loved attending all of their sporting events. Eileen was well known to many in the Hudson community, simply as “Nana.” She is survived by two sons and two daughters in law; Doug and Lee Mullett of Hudson, NH, Jack and Joanne Mullett of Lynn, MA, a daughter Victoria Mullett of Lawrence, MA, a sister, Sr. Cecilia Corbett of West Roxbury, MA, her two dear grandsons Sam Mullett and Ben Mullett both of Hudson and many nieces, nephews, and cousins. Visiting Hours will be held on Wednesday April 24th from 5pm-8pm in THE DUMONT-SULLIVAN FUNERAL HOME, 50 FERRY ST. IN HUDSON. A funeral mass will be celebrated on Thursday at 11am in Blessed John XXIII Parish at Infant Jesus Church, 121 Allds St. in Nashua. ALL MAY MEET AT CHURCH. Burial will be held following cremation at a later date. In lieu of flowers the family requests donations be made in Eileen’s loving memory to the Nashua Senior Activity Center, 70 Temple St., Nashua, NH 03060.

The family of Eileen Mullett created this Life Tributes page to make it easy to share your memories.