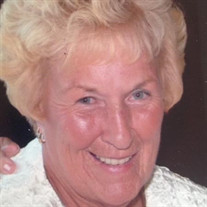 Eileen P. Dawe, of York, Maine, passed away peacefully in her home on August 1, 2015, surrounded by her family, after a period of declining health. She was born on January 20, 1942 in Brighton, MA, the daughter of the late John and Anna (Considine) Sullivan. She was the widow of Robert B. Dawe, who passed away on November 23, 2004. Eileen and Bobby were married for 44 years. Eileen was also pre-deceased by her brother Don and brother-in-law George. Eileen graduated from St. Columbkille’s High School in Brighton, MA and married Bobby on October 15, 1960. They lived in Somerville before buying their first house in West Roxbury in 1968. After several years of collecting life-long friends there, they moved out of the city, settling in Nashua in 1976. Eileen had many jobs supporting her growing family, including stints as a tax auditor for H&R Block and working at the old Lynch’s Department Store on Main Street, Nashua. For many years, she served as the business manager for the Nashua School Department. In addition, Eileen honorably served as a state representative for ward 8 with the NH State House from 1992-1998. Over the years, she and Bobby enjoyed many successes with starting businesses and making astute real estate investments. Despite battling numerous ailments over the past several years, Eileen never lost her tenacious wit or feistiness. She greatly enjoyed travel, visiting many parts of the US, Europe and Australia during her lifetime. Dividing her time between homes in Stuart, Florida and York Beach, Maine, she loved nothing better than hosting her children and grandchildren for a visit, enjoying relaxed, delicious meals at her favorite restaurants and telling stories from her many trips, experiences and friendships over a great glass of wine. She loved to instigate a spirited political debate or discuss the impact of a current event. The matriarch of an ever increasing clan, Eileen instilled the importance of family, constantly gathering the tribe at her home on the coast of Maine. She will be sorely missed for her love, compassion and insight. Survivors include two daughters and their spouses; Marianne and her husband Ernie Lange of Newport, VT and Patricia and her husband Paul Beaulieu of Merrimack, NH; three sons and their spouses; Robert and his wife Theresa Dawe of Clinton, MA, George and his wife Alicia Dawe of South Kingston, RI and Christopher and his wife Carrie Dawe of Nashua, NH. She is also survived by her dear niece Robbin and her husband William Shinkwin of Nashua, NH; and her sister-in-laws Janice Dawe of Tempe, AZ and Meg Sullivan of Orleans, MA. In addition, she is survived by 14 grandchildren, including Corinne Rossignol and Zach Rossignol of Boston, MA, Connor Rossignol of San Diego, CA, Nick Beaulieu of Mattapoisett, MA. Tess and Alec Beaulieu of Merrimack, NH, Danielle Brescia of Boston, MA, Bobby Dawe III of Clinton, MA, Abigail, Addison, and Alarie Dawe of South Kingston, RI and Kelsie, CJ and Kylie Dawe of Nashua, NH. In addition, Eileen is survived by Nicole Shinkwin of Santa Rosa, CA, Meghan Shinkwin of Phoenix, AZ, Jason Shinkwin of Boston, MA, and Melissa and Mike Saucier of Nashua, NH in addition to many more nieces and nephews. Visiting hours will be held on Wednesday, August 5th from 4-7 PM in the Dumont- Sullivan Funeral Home, 50 Ferry Street, Hudson. A funeral mass will be conducted on Thursday, August 6th at 10:00 AM at the Immaculate Conception Church, 216 East Dunstable Road, Nashua. In lieu of flowers, the family requests donations be made to the Scleroderma Foundation. 300 Rosewood Drive, Suite 105, Danvers, MA 01923 www.scleroderma.org

Eileen P. Dawe, of York, Maine, passed away peacefully in her home on August 1, 2015, surrounded by her family, after a period of declining health. She was born on January 20, 1942 in Brighton, MA, the daughter of the late John and Anna (Considine)... View Obituary & Service Information

The family of Eileen P. Dawe created this Life Tributes page to make it easy to share your memories.

Eileen P. Dawe, of York, Maine, passed away peacefully in her...