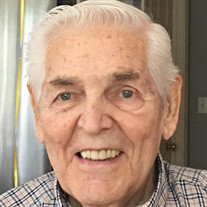 Edward S. Yagielowicz, 89, of Hudson, NH, died peacefully surrounded by his loving family on Thursday, November 22, 2018.   He was born May 21, 1929, in Nashua, son of the late Bronislaw and Patricia (Stanewicz) Yagielowicz. Ed was predeceased by his wife, Marjorie (Deslauriers) Yagielowicz as well as by his sister, Jenny Piantidosi.    Ed was an Air Force Veteran, having severed his country honorably for four years. While in the service, he acquired a passion for P-51 Mustangs and would take his family to many air shows to listen to these beautiful planes fly over head. Ed was an avid New England Patriots fan as well as a dedicated gardener of roses. He loved developing his own new and unique varieties of roses. Ed was very “hands-on” and enjoyed building, fixing, and tinkering with his hands. He will always be remembered for his good-natured ways and for telling “Dad jokes,” which usually left him laughing louder than the other person. Ed’s greatest joy came when spending time with his family. He was so very proud of them and especially loved to be around his grandchildren.    His loving family includes a son, Stephen Yagielowicz and his wife Dawn of Weed, CA, a daughter, Sandi McCabe and her husband Ed of Amherst, NH, four beloved grandchildren; Jake McCabe of Winston-Salem, NC, Kenzie McCabe of Amherst, NH, Max McCabe of Amherst, NH, Tierney McCabe of Amherst, NH, a sister, Wanda Hamdan of Hudson, NH, a sister-in-law, Claire Deslauriers of Edgewater, FL, as well as several nieces and nephews.   A Mass of Christian Burial will be celebrated on Tuesday, November 27th at 10 a.m. in St. John Neumann Church, 708 Milford Rd., Merrimack, NH. All may meet at the church. The family would like for guests to dress in their New England Patriots fan wear, as a nod to Ed’s love for the team. Burial will be held in St. Stanislaus Cemetery, Pine Hill Road in Nashua. In lieu of flowers, the family suggests donations be made in Ed’s loving memory to the Alzheimer’s Association at alz.org.

Edward S. Yagielowicz, 89, of Hudson, NH, died peacefully surrounded by his loving family on Thursday, November 22, 2018.   He was born May 21, 1929, in Nashua, son of the late Bronislaw and Patricia (Stanewicz) Yagielowicz. Ed was predeceased... View Obituary & Service Information

The family of Edward S. Yagielowicz created this Life Tributes page to make it easy to share your memories.