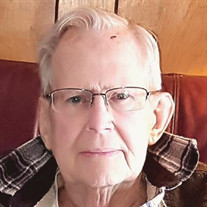 Edward D. Flanders, 89, of Hudson, NH, died peacefully on Monday, October 22, 2018 at his home while surrounded by his loving family.  He was born August 5, 1929 in Rutland, VT, son of the late George and Gertrude (Tuliper) Flanders. Ed was also predeceased by his beloved wife, Clair (Driscoll) Flanders, with whom he shared 52 wonderful years of marriage prior to her passing  in 2008. He is survived by his brother, Malcolm Flanders of Chelmsford, MA. He is predeceased by a brother, George Flanders and a sister, Gertrude Bullen.  Edward was a Retired Lt. Colonel in the United States Air Force, having dedicated over 20 years to honorably serving his country as a pilot. Prior to his distinguished military career, Ed received his degree in Mechanical Engineering from Northeastern University. He was a member of the Nashua Country Club where he enjoyed many friendships and wonderful times. He was a member of Stoney Brook Fish & Game Club in Chelmsford, MA and also a member of the VFW Post 5791 Hudson and the Nashua Elks Club. His loving family includes four daughters, Clair Jay Flanders of Hyannis, MA, Laura Dube and her husband Brian of Londonderry, NH, Paige Flanders - Beltley and her husband Nick Beltley of Osprey, FL, and Kelly Tebbetts of Nashua, NH, three grandchildren, Nicole Paradie of Londonderry, NH, Nathan Ravenelle of Hooksett, NH, Samantha Tebbetts White of Londonderry, NH, three great grandchildren, Alexa Ward, Hunter Ravenelle, and Cole Ravenelle, as well as several nieces and nephews and his dog and best pal, Jessie. Visiting hours will be held on Friday, October 26th from 4pm -7pm in THE DUMONT-SULLIVAN FUNERAL HOME, 50 FERRY ST., IN HUDSON. A Service of Remembrance will take place on Saturday, October 27th at 10am in the funeral home. Burial will be in St. Patrick’s Cemetery in Hudson. In lieu of flowers the family encourages donations be made in Ed’s loving memory to Fisher House Foundation where military and veterans families can stay free of charge while a loved one is in the hospital. You may do so at www.fisherhouse.org

Edward D. Flanders, 89, of Hudson, NH, died peacefully on Monday, October 22, 2018 at his home while surrounded by his loving family.  He was born August 5, 1929 in Rutland, VT, son of the late George and Gertrude (Tuliper) Flanders. Ed was... View Obituary & Service Information

The family of Edward D. Flanders created this Life Tributes page to make it easy to share your memories.