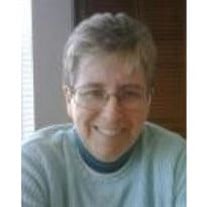 To know her was to love her....simply put, that was Edna Correia, 58 of Nashua, NH who was called to Heaven on Saturday August 11, 2012 after a brave battle against cancer. Edna, daughter of the late Raymond and Marion (McDermott) Lambert, was born December 4, 1953 in Albany, NY. She spent most of her life living in the Willimantic, CT area, graduating from Windham High School in 1972 and receiving her Associates Degree at Eastern Connecticut University in 1974. She spent almost a lifetime involved in the Drum and Bugle Corps activity starting in 1962 as a member of the Willimantic Wanderettes, then moving to the Golden Antlers, on to the New London Surfers and later the Rhode Island Matadors where she met her beloved husband David in 1977 doing what she loved most, playing her bugle. Later she would join other ensembles such as the Generations of Bristol, RI, The Defenders of Rockland, MA, and Legends. Edna worked her entire career as an executive assistant for many law firms and insurance companies, most recently for CGI Information Systems in Andover, MA and Concord Group Insurance in Concord, NH. She was a devoted wife, mother, and friend to just about everyone she met and always left her mark with a slice of advice, or simply that Edna smile. She is survived by her husband of 34 years David Correia of Nashua, NH; her son Christopher Correia and his girlfriend Kendra Staudinger of Auburn, MA; her daughter Catherine Correia and her fiancee Kara Courtney of Natick, MA; her son Peter Correia of Nashua; her sister and brother in law Kathleen and Daniel Burns of Destrahan, LA; brother and sister in law Paul and Laura Lambert of Willimantic, CT; brother and brother in law Raymond Lambert and Syd Adams of Gainesville, GA; brother and sister in law Robert Lambert and Deborah Scott of Willimantic, CT, Brother in law and sister in law Joseph and Joanne Correia of Jaffrey, NH; sister in law Rosemary Correia of Smithfield, RI; as well as many nieces, nephews, cousins and extended family and friends. Visiting Hours will be held on Tues. Aug. 14th from 4pm-8pm in THE DUMONT-SULLIVAN FUNERAL HOME, 50 FERRY ST. IN HUDSON, NH. A Funeral Mass will be celebrated on Wed. Aug. 15th at 11am in Immaculate Conception Parish, 216 East Dunstable Rd. in Nashua, NH. ALL MAY MEET AT CHURCH. A Private Burial will be held following cremation. In lieu of flowers the family encourages donations be made in Edna’s loving memory to either Southern NH Medical Center, Attention Oncology Dept., PO Box 2014, Nashua, NH 03061 or Home Health & Hospice Care, Attention Hospice House, 7 Executive Park Drive, Merrimack, NH 03054.

To know her was to love her....simply put, that was Edna Correia, 58 of Nashua, NH who was called to Heaven on Saturday August 11, 2012 after a brave battle against cancer. Edna, daughter of the late Raymond and Marion (McDermott) Lambert,... View Obituary & Service Information

The family of Edna (Lambert) Correia created this Life Tributes page to make it easy to share your memories.

To know her was to love her....simply put, that was Edna Correia,...