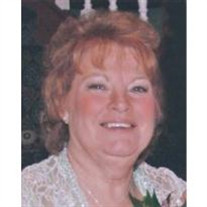 Dorothy A. (Finnigan) LaPlante, 58, of Hudson, NH died unexpectedly at her home on Sunday, February 28, 2010. Dottie was born on Sep. 11, 1951 in Cambridge, MA daughter of the late John and Dorothy (Hall) Finnigan and was also predeceased by two brothers, Chris A. Finnigan and John “Butch” Finnigan and a beloved Aunt, Jean Fraser Silva. Dottie was the loving wife of Val LaPlante Jr. of Hudson with whom she shared 36 years of marriage. Dottie was a graduate of Billerica High School. She was a former president of the Hudson Junior Woman’s Club. She served her community while working for the Hudson Police Dispatch and was a local business woman. Two of the things that she was most proud of in her life were her Irish ancestry and her granddaughter Kellcey. She was a wonderful grandmother. Besides her loving husband Val, Dottie is survived by a son, Val LaPlante III of Hudson; a daughter, Dawn LaPlante of Nashua; three sisters, Kathleen Perigny and her Husband Dennis of Methuen, MA, Maureen Atwood and her husband Vernon of Pelham, NH, Donna Grieco and her husband Frank of FL; two brothers, Robert Fraser and his wife Diane of Lyndonville, VT and Donald Fraser and his wife Jean of Chelmsford, MA; a granddaughter, Kellcey Lesmerises of Nashua; best friends, Ruthie Elliot of MA and Patricia Richardson of MI and Many nieces, nephews, cousins and dear friends. Visiting Hours will be held on Thurs. March 4th from 5-8pm in the DUMONT-SULLIVAN FUNERAL HOME, 50 FERRY ST., HUDSON, NH. A funeral service will be held on Fri. March 5th at 10am in the Funeral Home. The public may begin to arrive at 9:30am. Burial will take place at Edgewood Cemetery, Nashua.

Dorothy A. (Finnigan) LaPlante, 58, of Hudson, NH died unexpectedly at her home on Sunday, February 28, 2010. Dottie was born on Sep. 11, 1951 in Cambridge, MA daughter of the late John and Dorothy (Hall) Finnigan and was also predeceased... View Obituary & Service Information

The family of Dorothy "Dottie" LaPlante created this Life Tributes page to make it easy to share your memories.