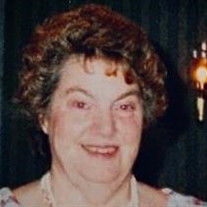 Dorothy Ann (Wallace) LaBonte, a long-time resident of Hudson, NH and Highland Lakes, FL passed away peacefully on Friday, November 22, 2019 with her loving family at her side.  She recently celebrated 63 years of marriage with her devoted husband Robert (Bob) Jean LaBonte. Dot was born in Franklin, NH on April 12, 1935 the only child of Gordon and Lillian (Hebert) Wallace.  She worked at the family grocery store where she met Bob when he would come sit at the lunch counter and she would join him.  She graduated from Franklin High School class of 1953 and Rivier College in 1956.  They married in 1956 and started their family while living in Baltimore, MD and then moved to Hudson, NH where they resided for nearly 60 years, raising four children.  Dot made a loving home, worked as a substitute Elementary teacher and Catechism teacher at St. John’s School and later worked for the Irish Cottage.   Whenever she met someone, she always wanted to know something more about them in order to find a connection of relations or friends in common. Dot was a very active member of the Catholic Daughters of the America’s (CDA) since joining in 1960 where she served as Court Regent and then State Regent for NH Bishop Malloy Court #1441. Dot and Bob enjoyed vacations camping, skiing, and snowmobiling with their children and extended family eventually building a family vacation home in the National Forest of the White Mountains where all would gather and create lasting memories.  They traveled extensively back and forth across the country in their private planes and motorhomes.  They wintered in Highland Lakes, Florida and always enjoyed having visitors to their home and entertaining family and friends regularly.   Dorothy is survived by her husband Robert and their four children and families:  Steven LaBonte and wife Dianne of Warner NH, Michael LaBonte and wife Mary of Hudson NH, Richard LaBonte of Mont Vernon NH, Ann (LaBonte) MacKenzie and husband Kurt of Keene NH; six grandchildren: Danielle, Devon, Nicholas, and Nathan LaBonte, and Ian and Marisa MacKenzie; two great grandchildren: Kadence and Emelyn LaBonte.  Dorothy will be loved and remembered in our hearts forever. Visiting hours will be held on Sunday, December 1st from 1:00pm - 3:30pm, with a Service of Remembrance starting at 3:30pm in the DUMONT-SULLIVAN FUNERAL HOME, 50 FERRY ST., IN HUDSON. Burial will be private. In lieu of flowers the family encourages donations be made in Dorothy’s loving memory to either Camp Fatima or Camp Bernadette, with checks payable to either Camp Fatima or Camp Bernadette to Brendan Stackhouse, 32 Fatima Road, Gilmanton Iron Works, NH 03837 or online at http://bfcamp.com/about/donate/

Dorothy Ann (Wallace) LaBonte, a long-time resident of Hudson, NH and Highland Lakes, FL passed away peacefully on Friday, November 22, 2019 with her loving family at her side.  She recently celebrated 63 years of marriage with her devoted husband... View Obituary & Service Information

The family of Dorothy LaBonte created this Life Tributes page to make it easy to share your memories.