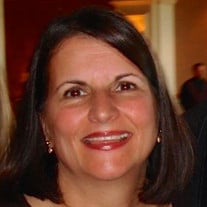 Doreen (Primatello) Fusco, 57 of Nashua, passed away peacefully at home on Thursday, January 22, 2015. She was surrounded by her loving family and friends. She was born August 28, 1957 in Revere, MA, daughter of Lawrence and Rose (Salerno) Primatello of Revere, MA. Doreen was the wife of Joe Fusco of Nashua, with whom she shared 34 years of marriage. Doreen will be remembered for always placing family and friends before herself. Whether it was making Halloween costumes for the kids, cooking a delicious meal, or sewing and mending, every task was always done with love. She was a member of the Nashua Country Club where she enjoyed socializing, curling, and golfing. Doreen also had a fulfilling career as a medical assistant for over 30 years at Nashua Medical Group and Foundation Medical Partners where she continued to care for others. Besides her loving husband Joe, and her dear parents Lawrence and Rose, survivors include two daughters; Kristen Fusco of Melrose, MA, Lauren MacDonald and her husband Jim of Boston, MA, a brother; Larry Primatello and his wife Donna of Georgetown, MA, three sisters; Janice van Hogezand and her husband Maarten of Lynn, MA, Lorraine O’Brien and her husband Larry of Mashpee, MA, Elaine Cataldo and her husband Ed of Boxford, MA, a brother in law; Rick Fusco and his wife Kim of Merrimack, NH, a sister in law Karen Simi and her husband Bob of Peabody, MA, as well as numerous nieces, nephews, cousins, and many dear friends. Visiting hours will be held on Monday January 26th from 4pm-8pm in the DUMONT-SULLIVAN FUNERAL HOME, 50 FERRY ST. IN HUDSON. A funeral mass will be held on WEDNESDAY, JANUARY 28TH AT 11AM in Immaculate Conception Parish, 216 East Dunstable Rd., Nashua. All may meet at church. Burial will be in St. Louis Cemetery, Nashua. In lieu of flowers the family encourages donations be made in Doreen’s loving memory to the Massachusetts General Hospital Pappas Center for Neuro-Oncology and can be mailed to The MGH Cancer Center, c/o MGH Development Office, 100 Cambridge St., Suite 1310, Boston, MA 02114.

Doreen (Primatello) Fusco, 57 of Nashua, passed away peacefully at home on Thursday, January 22, 2015. She was surrounded by her loving family and friends. She was born August 28, 1957 in Revere, MA, daughter of Lawrence and Rose (Salerno)... View Obituary & Service Information

The family of Doreen Fusco created this Life Tributes page to make it easy to share your memories.