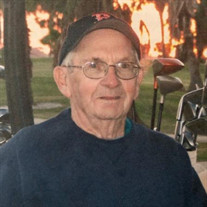 Donald Charles Shepard Sr., 93, died October 30, 2021 in Hudson, NH with his family by his side. Donald was born in Norfolk, Virginia, January 18, 1928, son of Basil and Ethel (Merrill) Shepard.He was married to Rita N. Shepard for 70 years until her passing in 2020. He was predeceased by his brother William M. Shepard and his sisters Wanda Richard, Norma Keating, Lois LoPiano and Janice Rosato. Donald was a friend to all who knew him and will always be dearly loved by his family and close friends. He married the love of his life Rita in 1950. He was an extraordinary husband, father, grandfather and great-grandfather. He grew up in Hudson on Maple Avenue. When he was young he worked at Benson's Wild Animal Farm. He helped care for “Betsy” the elephant. He attended Hudson and Nashua schools, graduating from Nashua High School, Class of 1946. He was an excellent student and editor of the Yearbook. Donald was proudly employed by Public Service Company of NH (Eversource) for 40+ years. He started as a young man at the Warren Street Substation in Nashua where he was responsible for turning the street lights on at night and then off again in the morning. He rose through the ranks and eventually became Manager of the Power Supply Control Center in Manchester. He earned the respect of his co-workers and the people he supervised. He was a self taught carpenter, electrician and overall terrific handyman. He built his own homes as well as assisting his children and many friends with their homes. His wife was always by his side helping him. He built early American reproduction furniture. He was an avid reader, particularly American History. He often quoted Shakespeare. He loved music, especially Frank Sinatra, Tony Bennett and Luciano Pavarotti. He had a wonderful singing voice and loved to whistle. He and his wife loved to dance. He had a great sense of humor and often enjoyed puns. He was an accomplished golfer. He was a fan of the Boston sports teams. He and his wife thoroughly enjoyed watching their children and grandchildren play sports. They also enjoyed countless games of cribbage. Donald and Rita traveled to the Bahamas, Bermuda and Barbados. They loved to swim in oceans and lakes. They spent many winters at Cape Canaveral, FL where they had great times with their dear friends, Wally and Joan Jalbert. Many enjoyable summer months were spent at Pemaquid, Maine and Goose Rocks Beach, Kennebunkport, Maine. He was a long time member of the Church of the Good Shepherd, Nashua where he served on the Vestry and taught Sunday school. He was Superintendent of the Sunday School. He loved to sing the hymns during church services. Donald loved the town of Hudson. He was a devoted civil servant and actively attended all town meetings. He coached Little League Baseball and Junior High Basketball. He served as chairman of the School Board. He served on the School Board for 17 years and when Alvirne High School burned in 1974, he was instrumental in overseeing the re-building of the high school in a one (1) year time frame. He served on the Budget Committee, and was chairman of the Alvirne Trustees. He was also president of the Whip-Poor-Will Golf Association. He is survived by his beloved children; sons, Donald C. Shepard Jr. and his wife Sandra of Milford, and Robert M. Shepard and his wife Linda of Pelham; daughter, Brenda S. Conrad and her husband Albert of Groton; his beloved grandchildren; Derek Conrad of Rochester, Michael Shepard and his wife Mia of Nashua, Nicholas Shepard and his wife Linda of Nashua, Stephanie Gardner and her husband Eli of Bridgewater, MA, Nicole Zaremski and her husband Jeffrey of Norwood, MA, Allison Shaffer and her husband Justin of S. Portland, ME and Lindsay Shepard of Brooklyn, NY; his beloved great-grandchildren; Savannah, Sophia, Camden and Peyton Rose; his sisters in law, Marilyn Shepard, Irene Fortune and Frances Nazer; and many nieces, nephews and friends. The Shepard Family would like to thank the staff of The Inn at Fairview for the care Donald received. Friends are invited to attend the funeral service which will be held Tuesday November 9, 2021, 11:00 a.m. at Church of the Good Shepherd, 214 Main Street, Nashua.All may please meet at church. Covid 19 protocols will be followed. Private Graveside service to follow for family only. In lieu of flowers, donations may be made in memory of Donald C. Shepard, Sr. to the charity of your choice.

Donald Charles Shepard Sr., 93, died October 30, 2021 in Hudson, NH with his family by his side. Donald was born in Norfolk, Virginia, January 18, 1928, son of Basil and Ethel (Merrill) Shepard.He was married to Rita N. Shepard for 70 years... View Obituary & Service Information

The family of Donald Charles Shepard, Sr. created this Life Tributes page to make it easy to share your memories.