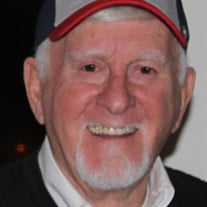 Donald Joseph Fay, born October 29, 1937, passed away on Sunday January 16th, 2022 surrounded by his loving wife, children and daughter-in-law. He lived a full life growing up in Fall River, MA with his two older brothers Frank and Albert, sister Connie and an identical twin brother Robert (Bro as he called him). Don married Dorothy Marion Elias whom he adored for all their 58 years of marriage. They moved to Nashua, NH in 1970 and raised their 4 children Kim, Jeff, Kevin, and Chris in the same house they still reside today. His family was his most prized possession and provided years of enjoyment. Although he preferred to be behind the scenes, he was the silent leader of the family. He was idolized by his kids and grandchildren; he reveled in all their successes and supported them in their disappointments. His unwavering love and devotion to his wife Dot provided a lifelong example for all his family to follow. Don always enjoyed staying active coaching/playing baseball and basketball in his younger years. He participated in bowling and golf leagues for over 40 years and made so many lifelong friendships. Anyone who knew him could see how much he enjoyed the social and camaraderie aspects of any situation; people gravitated to him because he was warm, witty, and approachable. He loved telling stories of his kids, then grandkids and was truly interested in hearing stories from others about their family and grandkids. Don is survived by his wife Dorothy, daughter Kimberly and her children Samantha, Jack and Owen, son Jeffrey, his wife Diana and their children Samuel, Amanda and Lily, son Kevin, his wife Shelley and their children Adam, his wife Abbey, Bradley and Max and son Christopher and his children Emma and Abigail. A Mass of Christian Burial will be held on Friday, January 21st at 2:00pm in Immaculate Conception Church, 216 East Dunstable Road in Nashua. All may meet at church. Face masks are required. Burial will be private. In lieu of flowers, donations can be made in Don’s memory to one of Don’s favorite people, Ned Sullivan. https://nedstrust.com/ Ned's Trust is a special needs trust set up by his family to ensure that Ned can live up to his greatest potential in his own home with his family.  Ned is a young man who endured a devastating car accident leaving him a quadriplegic with traumatic brain injury. Don and Ned formed a very special bond over the years as Ned continued his recovery and Don gave him encouragement and strength through his kindness, wit, and lively sports banter.  They shared a lot together - Red Sox, Pats, bowling and golfing stories on Don's side and Ned would share his physical challenges as well as hysterical stories about Kasey, Ned's helper capuchin monkey.

The family of Donald Fay created this Life Tributes page to make it easy to share your memories.