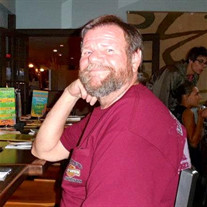 Donald Alan Evanson, 61, of Hudson, NH, and long time resident of Francestown, NH, died Saturday, July 11, 2015. He was born March 31, 1954 in South Weymouth, MA, son of Carrie (Grono) Evanson of Hudson and the late Robert H. Evanson. Donald was the husband of Tawny (Hall) Evanson of Hudson. He was an avid motorcycle rider who could be found taking day trips and simply riding around. He enjoyed hunting, fishing and going to the beach. Donald was employed with Meggett Avionics for over 17 years and was an advocate for donating blood to the American Red Cross, something he did as often as possible. He was a dear friend to all and will be greatly missed. Besides his loving wife and dear mother, survivors include a son Brian Evanson and his significant other Katherine Riotte of Queensbury, NY, a daughter Jeannette Stanley and her husband Tim of New Boston, NH, a step daughter Dallas Lefebvre and her husband Matthew, a step son Lee Biegen all of Athol, MA, three grandchildren Jacob Stanley, Mirah Stanley, and Lucas Lefebvre, two sisters Carolyn Levesque and her husband Thomas of Amherst, NH, Linda Sinotte and her husband Thomas of Stuart, FL, as well as two nieces, a nephew, a cat Roody, a dog Rascal, and many dear friends. A Service of Remembrance will be held on Thursday, July 16th at 2pm in THE DUMONT-SULLIVAN FUNERAL HOME, 50 FERRY ST. IN HUDSON. Friends and family may begin meeting at the funeral home at 1pm. Burial will be private. In lieu of flowers the family requests donations be made in Donald’s loving memory to either American Red Cross, PO Box 4002018, Des Moines, IA 50340 or Humane Society for Greater Nashua, 24 Ferry Road, Nashua, NH 03060.

The family of Donald Alan Evanson created this Life Tributes page to make it easy to share your memories.