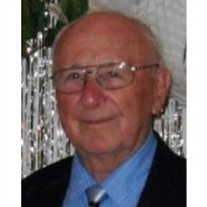 Donald G. Deslauriers Sr., 83, of Edgewater, FL died Thursday August 30, 2012 at the Community Hospice House in Merrimack, NH surrounded by his loving family. Donald was born in Nashua, NH on July 13, 1929 son of the late Ledger and Beatrice (Lamb) Deslauriers and was also predeceased by a sister Marjorie Yagielowicz. Donald was the loving husband of Claire (Maurice) Deslauriers, of Edgewater, FL. Donald was educated in Nashua Schools and went on to serve his country honorably in the US Navel Reserves. He loved to golf and dance and was a member of the Nashua Elks Lodge for 45 years. Donald was employed at Nashua Corporation for 45 years and retired in 1993. Donald and Claire had lived in Hudson, NH for more than 40 years, and spent the past 9 years living in Florida. Besides his loving wife Claire, Donald is survived by a son, Donald Deslauriers Jr. and his wife Judy of Wilton, NH; a daughter, Judith Boulanger and her husband Leonard of Bethlehem, NH; a former daughter-in-law, Nancy Deslauriers; four grandchildren, Cynthia (Boulanger) Palmer, Sharon (Boulanger) Hagenow, Donald L. Deslauriers and Dustin T. Deslauriers; five great-grandchildren, Drake, Emily, Austin, Carson, Parker and many nieces, nephews and dear friends. A Funeral Mass will be held at 9:30am on Wednesday the 5th of September at Blessed John XXIII Parish at St. John the Evangelist Church, 27 Library St., Hudson, NH. All To Meet At Church. Burial will take place at a later time.

The family of Donald Deslauriers Sr. created this Life Tributes page to make it easy to share your memories.