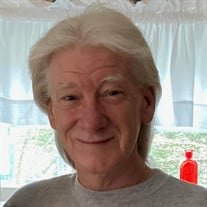 Donald (Don/Donnie) Aloysius Derr, Jr., 70, of Nashua, New Hampshire passed away unexpectedly on Wednesday, January 6, 2021. Don was born November 22, 1950 in Bronx, New York to Donald and Mary (Albus) Derr, and was one of four children. He graduated from All Hallows High School in the Bronx in 1968. He served in the U.S. Army during the Vietnam War. On January 18, 1975, he married Ann Marie Serra, they had been childhood sweethearts since 1966. Don was employed as a Director of Customer Service at Interactive Data in New York, NY and Bedford, MA for thirty years. He retired in 2011 and spent most of his time with his two grandchildren who were the light of his life. Don is survived by his wife of 46 years, Ann Marie (Serra) Derr; his daughter Melissa (Derr) Stevens and her husband Matt and two grandchildren Klara & Matthew of Bedford, Massachusetts; his brother Richard Derr of Bronxville, New York and many loving relatives. Donald was preceded in death by his parents, older sister, Judith (Derr) Falco and older brother, Robert Derr. A private visitation will be held for the family. A Mass of Christian Burial for Don will be at Immaculate Conception Church, 216 East Dunstable Road, Nashua, NH at 11:30 AM. All may meet at church. Don will be laid to rest at Fairview Cemetery in North Chelmsford, Massachusetts. Anyone attending any potion of the services are asked to please wear a mask or facial covering and to please follow the social distancing guidelines in place. In lieu of flowers, donations may be made in his name to the American Heart Association at www.heart.org

Donald (Don/Donnie) Aloysius Derr, Jr., 70, of Nashua, New Hampshire passed away unexpectedly on Wednesday, January 6, 2021. Don was born November 22, 1950 in Bronx, New York to Donald and Mary (Albus) Derr, and was one of four children. He... View Obituary & Service Information

The family of Donald Derr Jr. created this Life Tributes page to make it easy to share your memories.