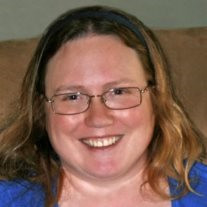 Deborah "Debbie" (Keane) Mroz, 52, of Manchester died Saturday, January 25, 2014 at Greenbriar Healthcare in Nashua following a courageous battle with ALS. She was born July 20, 1961 in Manchester, daughter of Paul Keane of Brentwood, NH and the late Frances (Binette) Keane. Debbie was the wife of Steven Mroz of Manchester. Debbie was employed for many years with CPM in Merrimack. She was an avid fan of NASCAR, enjoyed making jewelry, and loved crafting with her children. Besides her loving husband and dear father, survivors include a son; Michael Morrison and a daughter; Sarah Morrison both of Brentwood, NH, a stepson; Charles Mroz of Chelmsford, MA, a brother; Jim Keane of Brentwood, NH, three sisters; Virginia Fuller of Brentwood, NH, Lisa Forrence of Litchfield, NH and Jennifer Hutchinson of Dover, NH. As well as several nieces and nephews. Visiting hours will be held on Wednesday Jan. 29th from 5pm - 8pm in the DUMONT-SULLIVAN FUNERAL HOME, 50 FERRY ST IN HUDSON, NH. A funeral mass will be celebrated on Thursday Jan. 30th at 10am in Blessed John XXIII Parish at St. John the Evangelist Church, 27 Library St. in Hudson. All may meet at church. Burial will be in Woodlawn Cemetery in Nashua. In lieu of flowers, the family requests donations be made in Debbie’s loving memory and may be sent to: NH ALS Association, Northern New England Chapter, 10 Ferry St., Concord Center, Suite 309, Concord, NH 03301.

The family of Deborah "Debbie" (Keane) Mroz created this Life Tributes page to make it easy to share your memories.