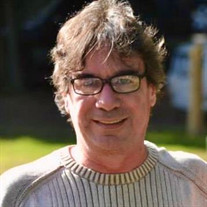 It is with heavy hearts that we announce that David Persall, age 60, died April 23, 2022, due to injuries sustained in a car accident in Nashua, NH on April 9, 2022. David was a long-time resident of Hollis, NH and formerly of Lexington, MA, Nashua, NH and Hudson, NH. He was a 1980 graduate of Hollis Area High School. David built a 40-year career with Custom Manufacturing Services leading to the honor of becoming Vice President of Engineering and part owner of the business. He accomplished all of this without any formal education or degrees. He just had an innate capacity for all things electronic and mechanical. This started at a very young age (around 7) when he would tinker with his grandfather’s broken radios and watches and to everyone’s amazement, he would get the things running! At that point the family knew he had a special gift. David also had natural musical abilities. Totally self-taught, he played drums as a young child and later picked up a guitar which turned into a lifetime passion. In earlier years David formed a band, Floor 13, and rocked some local venues for several years. David was most content surrounded by all of his guitars, amps and recording equipment just jamming away for the pure joy of it. He also liked a good game of cards, and every Friday night David would join his crew for an evening of poker. The title that David was most proud of however was Dad and then eventually leading to the honor of Grandpa. David is survived by his children, Christopher Persall and his partner Missy Fortin-Marshall of Nashua, NH, Kaylin Persall and her partner George Cole of Nashua, NH, his mother, Ellen Forshay of Hollis, NH, his siblings, Donna Keller and her husband Matt of Gilsum, NH, Kathy Koster and her husband Jim of Temple, NH and Anthony Forshay of Hollis, NH, and his four grandchildren Lily, David, Christian, and George, and his niece Heather Servant of Swanzey, NH and his two great nephews, Lennon and Sunny, and his entire CMS family, poker buddies and friends. A visitation will be held at Dumont-Sullivan Funeral Home, 50 Ferry St, Hudson, NH between 5 pm – 7 pm on Monday, May 2, 2022. In lieu of flowers, the family requests donations be made to the American Diabetes Association, https://www.diabetes.org/ or Gateways Community Services, 144 Canal St, Nashua, NH 03064, www.gatewayscs.org/donate

It is with heavy hearts that we announce that David Persall, age 60, died April 23, 2022, due to injuries sustained in a car accident in Nashua, NH on April 9, 2022. David was a long-time resident of Hollis, NH and formerly of Lexington, MA,... View Obituary & Service Information

The family of David Persall created this Life Tributes page to make it easy to share your memories.

It is with heavy hearts that we announce that David Persall,...