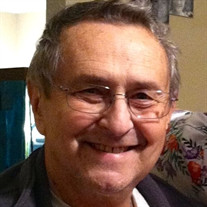 Daniel T. Olin, 69 of Litchfield, NH died Saturday, September 13, 2014 at his residence surrounded by his loving family. He was born February 13, 1945 in Lowell, MA, son of Mary (Silveira) Olin of Springhill, FL and the late Manuel Olin. He was also predeceased by a sister in law; Barbara Olin. Daniel was the husband of Catherine (Keough) Olin of Litchfield, with whom he recently celebrated 50 years of marriage on August 23rd. He was employed with Courier Citizen Corp. for over 30 years. He enjoyed salt water fish and caring for them in his fish tanks. Daniel also enjoyed snorkeling in the Florida Keys, archery, target shooting, and was a Life Member of the Centerville Sportsman Club in Dracut, MA. He had a passion for old cars, loved attending car shows and was always tinkering with his 62 Oldsmobile Starfire. Most of all, he enjoyed spending time with his children, grandchildren and his extended family.  This is what gave him the most joy. Besides his loving wife Catherine and his dear mother Mary, survivors include two sons; Thomas Olin and his wife Tracy of Nashua, Manuel Olin and his wife Deann of Londonderry, two daughters; Lisa Ballard and her husband Duane of Lake Elsinore, CA, Lori Karalash and her husband Markus of Hudson, a brother; Edward M. Olin of Lowell, MA, 11 grandchildren; Toni Olin, Paul Olin, Caitlin Carter, Cassandra Carter, Ashlee Ballard, Wayne Ballard, Justin Olin, Mackenzie Olin, Sydney Olin, Chloe Karalash, Dylan Karalash, 1 great grandson; Owen Carter, a Godson; Corey Stankiewicz, two God daughters; Meaghan Tourville and Elizabeth Leonard, four sisters in law, one brother in law and many nieces and nephews. A funeral mass will be celebrated on Thursday Sept. 18th at 11 am in St. Francis of Assisi Church, 9 St. Francis Way, Litchfield, NH. ALL MAY MEET AT CHURCH. Burial will be private. In lieu of flowers the family requests donations be made in memory of Daniel to the NH Food Bank, 700 E Industrial Park Dr., Manchester, NH 03109.

Daniel T. Olin, 69 of Litchfield, NH died Saturday, September 13, 2014 at his residence surrounded by his loving family. He was born February 13, 1945 in Lowell, MA, son of Mary (Silveira) Olin of Springhill, FL and the late Manuel Olin. He... View Obituary & Service Information

The family of Daniel Olin created this Life Tributes page to make it easy to share your memories.