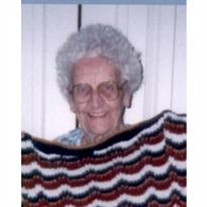 D. Barbara (Marple) Ordway, 90, of Hudson, died peacefully September 29, 2008 in her home, surrounded by family and friends, following a brief illness. Barbara was born in Lynn, Massachusetts on September 25, 1918, the youngest child of the late Frank and Dora Ellis of Lynn. Shortly after her birth, both of her parentsdied in the 1918 Asian Influenza Epidemic and Helen and William Marple of Kingston adopted her. Mrs. Ordway grew up in Kingston and graduated from Sanborn Seminary in 1939, having taken several years off from her studies to care for mother, who had fallen ill. After completing high school, she married Herbert Nason of West Kingston. The couple had two daughters, Brenda and Rachel. Following the death of her first husband in 1945, she later met and married Ralph Ordway of South Kingston, who was a beloved stepfather to Brenda and Rachel. The family lived in South Kingston for many years, where they operated Ordway Heating Oil Inc. After their retirement, the couple divided their time between their winter residence in Kissimmee, Florida and their summer cabin in Barrington. Barbara is a past master of Granite State Grange in Newton and a past Noble Grand of the Ruth Rebeccah Lodge and member of the Eastern Star, both in Kingston. She also spent many of her retirement years as a “Pink Lady” volunteer in St. Cloud, Florida. Mrs. Ordway was known for her caring, generous nature, her ability to make friends wherever she went and her talented needlework skills. She created over 100 handcrafted afghans for her family and friends over the years. In addition to her first husband, Herbert, she is predeceased by her second husband, Ralph Ordway; sisters Wilma George of Kensington, Doris St. Laurent of Arizona and Alice Myers of Florida; and a brother Robert Childs of Shingletown, California. She is survived by daughter Brenda and her husband Bill Rand Sr. of South Paris, Maine; daughter Rachel and her husband George of Hudson; granddaughters Deborah and her husband Carl Schrempf of Hampton Falls; Denise and her husband John Hall of North Hampton and April Guilmet and special friend Jaegan LaViolette of Nashua; grandson Bill Rand Jr. and his wife, Brenda, of Kensington; sister Ellen O’Kane of Ocala, Florida; great-grandchildren Carl Jr. and Richard Schrempf, Katie Turner and Morgan Rand, and two great-great grandsons, plus countless other nieces, nephews and friends. A memorial service is scheduled for Saturday, October, 11, 2008 at the Newton Junction Baptist Church, 11 a.m. A gathering at Horace Williams Hall will immediately follow. In lieu of flowers, Barbara had requested that donations might be made to the charity of one’s choice.

The family of D. Barbara (Marple) Ordway created this Life Tributes page to make it easy to share your memories.