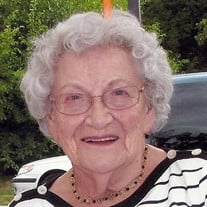 The sixth of eight children to Ovide and Eva Bouley, Clara was born on November 11, 1916 in her parents’ home in Nashua, NH.  When she was five months old, the family moved to Hudson, NH where she has lived since then.  There, she attended the Presentation of Mary Academy and Webster schools and worked at the Jackson Mills and Sprague Electric. In 1936, she married Alphonse Charest and in 1948, they built their Hudson home.  They raised two daughters, Pauline Gordon of Manchester, NH and Diane Braga of Ellington, CT. In her retirement years, she joined the Hudson Seniors where she has many friends. She also volunteered at the Meals on Wheels program for fifteen years as a kitchen helper and server. Clara was a good friend who unselfishly gave of her time to help others in need.  She missed her Senior friends due to transportation issues and her countless Bingo games and times together. She kept busy maintaining her home and yard. Her favorite activities included reading mystery novels, playing cards, namely, solitaire and gin rummy, with her four grandchildren and five great-grandchildren along with spending time with her family. She believed that one “needs to keep moving because the body was not meant to sit and do nothing”. Besides her two loving daughters Pauline and Diane, Clara is survived by a son-in-law Kenneth Braga; a close family friend Edouard Forcier; four grandchildren, Melanie DeZenzo and husband Robert, Rosalyn Smith and husband Stephen, Erin Jones and husband Michael and Kristin Flaherty; five great grandchildren, Steven DeZenzo and his fiancée Kate Kinney, Jennifer Chadbourne and husband Matthew, Briana Smith, Blaine Smith and Ashley Jones. Visitation period will be held on Thursday morning from 8am-9:30am in the Dumont-Sullivan Funeral Home, 50 Ferry St., Hudson, NH. A Funeral Mass will be celebrated immediately following beginning at 10am in St. Kathryn’s Church, 4 Dracut Rd., Hudson, NH with burial taking place in St. Francis Cemetery, Nashua. Clara’s family would like to thank all of the caring staff at St. Teresa Rehabilitation and Nursing Center, as well as the many friends and family members for their continuous support. In lieu of flowers the family has requested that donations be made to the George H. And Ella M. Rodgers Memorial Library Fund, 194 Derry Rd., Hudson, NH 03051 or St. Teresa Rehab and Nursing Center, 519 Bridge Street Manchester, NH 03104.

The sixth of eight children to Ovide and Eva Bouley, Clara was born on November 11, 1916 in her parents&#8217; home in Nashua, NH.  When she was five months old, the family moved to Hudson, NH where she has lived since then.  There, she attended... View Obituary & Service Information

The family of Clara Charest created this Life Tributes page to make it easy to share your memories.

The sixth of eight children to Ovide and Eva Bouley, Clara was...