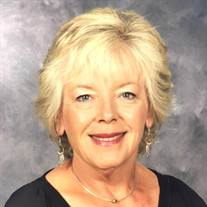 Cheryl was born in Dorchester MA on March 12, 1955. Her family moved to Burlington MA in 1968, when she was a freshman in high school. She graduated from Burlington High in 1972. She met her future husband Brian in the summer of 1978, and they were married on October 19, 1984. They moved to Hudson in the summer of 1985. Their son Ryan was born in 1985, and Patrick was born in 1988. After being a stay at home Mom for 10 years with her two boys, she rejoined the workforce in 1995 at Balzars in Hudson. In 2000, she left that company and went to work for the Hudson School District in the SAU department. After several years she moved to Nottingham West School, where she was the administrator for the Special Education division. Several years ago she moved to Library Street School in Hudson to be the administrator. She will be remembered as the beautiful person that greeted everyone at the front door with a smile and a kind word. When Ryan and Patrick were growing up, her home was always open to their friends, and still is to this day. The birthday parties for the boys usually ended up turning into a giant sleepover, with breakfast the next day. She had several “adopted” sons that were regular visitors over the years. She also enjoyed the large backyard parties we would have, with young and older alike just having fun. One of her favorite things to do was to shop for bargains at TJ Max and other outlets. She would come home with unbelievable deals on beautiful tops, sweaters, and dresses. She was always dressed beautifully, and prided herself on her impeccable appearance. Many compliments came her way. She also enjoyed decorating her home for all the seasons and holidays. Christmas was by far her favorite, as she would spend days wrapping garland around the staircase, setting up the Dickens village, decorating the tree, and filling the mantle above the wood stove with family favorites. She also enjoyed taking care of her many perennials in the front yard, and creating her own seasonal hanging baskets for the deck and front porch. Her creations were just amazing when in full bloom. Cheryl’s favorite of all, was being with her beloved yellow lab, Toby, who passed away in June 2014 at the age of 10. She would take him for long walks every day, play with him, and then he would join her on the couch for some TV at night. She absolutely loved and adored her “little boo” and missed him dearly. Cheryl loved to spend time with her husband Brian, the love of her life, whether it be just hanging out on the deck sitting in the Adirondack chairs and sharing a beverage, along with many stories and laughs, or taking weekend trips to the White Mountains in the summer and fall. She also enjoyed the many late nights out at the bonfire in the backyard, whether it be a group of friends, or just her and Brian. Saturday night was dance night, and she and Brian would dance for hours in the kitchen listening to 50’s and 60’s tunes. She also enjoyed visits from her boys and their wives, her sons friends, and especially her new granddaughter, born in May 2015. Cheryl’s fight began in February 2014, when she was diagnosed with stomach cancer. She endured multiple invasive tests, chemotherapy every two weeks for sixteen weeks, two surgeries, and then endured complications after that. She came through chemo with flying colors, often returning to work the next day. The nurses at SNH were amazed every time they saw her, as she was just so radiant, well dressed, and beautiful. They all would ask her “why are you here, you don’t look sick.” She returned to work several months after having the tumor removed, much to the amazement of her doctors and colleagues. The cancer then re-appeared in December, and though she fought as hard as she could, it was too overwhelming this time around. Cheryl was an avid health enthusiast, and worked out every day, doing aerobics and riding the stationary bike. Even during chemo she would ride the bike for 10-15 miles per day. Her doctors attributed her amazing tolerance to the chemo and surgeries to the amazing shape she was in. Cheryl will be remembered by her friends and colleagues as a warm, funny, and beautiful person. Her wonderful sense of humor made everyone’s day, from friends and teachers, to the children and parents she came into contact with on a daily basis. Right up to the end she was the one consoling her friends and family. She will be missed dearly by all that knew her. Cheryl is survived by her loving husband of 31 years, Brian O’Toole of Hudson, NH; her son Ryan and his wife Allison of Tyngsboro, MA; her son Patrick, his wife Melanie, and granddaughter Harper of Londonderry, NH. She was the beloved daughter of Patrick Flanagan of Wells, ME and Doris Flanagan of Burlington, MA. She is also survived by her sister Susan Miles of Salem, NH and her loving nieces and nephews. In lieu of flowers, donations can be made to the New Hampshire Humane Society.

Cheryl was born in Dorchester MA on March 12, 1955. Her family moved to Burlington MA in 1968, when she was a freshman in high school. She graduated from Burlington High in 1972. She met her future husband Brian in the summer of 1978, and... View Obituary & Service Information

The family of Cheryl Ann O'Toole created this Life Tributes page to make it easy to share your memories.