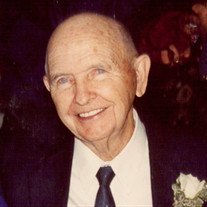 Mr. Charles H. “Chick” Smith, age 87, of Hudson, NH, died Friday at Holy Family Hospital in Methuen, surrounded by his loving family. He was the husband of Mildred T. (Burgoyne) Smith, with whom he shared 67 years of marriage. Born and raised in Medford, MA, he was the son of the late Cecil Howard and Mary-Ann (McCourt) Smith. He had lived in Hudson for over 40 years. Chick was a graduate of Malden Catholic High School, class of 1945. He served in the United States Navy during World War II. He worked as a letter carrier for the United States Postal Service in Boston and Medford until his retirement in 1971. Chick enjoyed gardening and reading and was an avid football fan. Although he loved his ice cream, his greatest joy came from spending time with his family. He was the father of Michael Smith and his wife Suzanne of Winthrop, MA, the late David Smith and his wife Aline of Lynn, MA, Stephen Smith and his wife Mary of Methuen, MA, Peter Smith and his wife Deanna of Peabody, MA, Joyce Jobin and her husband William of Hudson, NH, Donald Smith and his wife Susan of Snowmass, CO, and Sandy Smith of AZ. He also leaves 25 grandchildren; 24 great-grandchildren; and many nieces and nephews. He was the brother of the late Fred Murphy, Catherine Farley, C. Howard Smith and Rev. Mark Smith. Visiting hours will be held on Monday, August 4, from 4 to 8 p.m., in the Dumont-Sullivan Funeral Home, 50 Ferry Street, Hudson, N.H. A Funeral Mass will be celebrated on Tuesday, August 5 at 11 a.m., in St. Mark the Evangelist Church, 1 South Rd., Londonderry. Relatives and friends are respectfully invited. In lieu of flowers, donations may be made to the National Multiple Sclerosis Society, Greater New England Chapter, PO Box 845945, Boston, MA 02284-5945.

Mr. Charles H. &#8220;Chick&#8221; Smith, age 87, of Hudson, NH, died Friday at Holy Family Hospital in Methuen, surrounded by his loving family. He was the husband of Mildred T. (Burgoyne) Smith, with whom he shared 67 years of marriage.... View Obituary & Service Information

The family of Charles "Chick" Smith created this Life Tributes page to make it easy to share your memories.