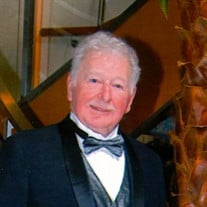 Charles Guill Jr., 89, of Francestown (formerly of Hudson) NH, died peacefully at his home on July 22, 2016. Charlie was born August 31, 1926 in Nashua to Charles and Yvonne (Mirault) Guill. He was inducted into the Navy in 1945. He attended St. Michael’s College in Vermont and returned to Nashua to wed Jeannette (Jacques) and raise six children. In his earlier years he was active in the Knights of Columbus and Church Council at St. John the Evangelist Church and surprised children every Christmas by playing Santa. He was a former member of the zoning board and budget committee in Hudson. Charlie was a pharmaceutical salesman for W. H. Rorer (Maalox) and covered New Hampshire, Vermont and parts of Massachusetts, retiring in 1986. He prided himself on being well informed about current affairs and never shied away from a debate. Charlie lived to hunt and fish and always had his fly rod ready. He could tease a trout from any obscure stream. Fish feared him. He enjoyed the company of many friends at Pleasant Pond who enriched his life and who he considered to be his extended family. He was predeceased by Jeannette and two sisters, Lucille and Gabrielle. Members of his family include his six children: Cynthia Guill of Annapolis, MD, Michelle “Mickey” Rudolph and her husband John of Nashua, Patricia Mason and her husband Brian, John Guill and his wife Rachel of Hudson, Kathy Dow and her husband Darrell of Fairfield, ME., and James Guill and his wife Vicki of Hudson; a sister-in-law, Denise Jacques and a sister, Jeanne Tartalis and her husband Michael of Francestown. Seven grandchildren: Megan Ricard, Katherine and Jeffrey Rudolph, Jacklyn and Chelsea Guill and Katelyn and Jordan Guill; and several nieces and nephews. The family would like to express sincere gratitude for the excellent care provided by Dr. Pierre Dionne and his nurse Carol, his caregivers, Kate, Beth, Wendy, and Lynn Anne.  Visiting hours will be held on Monday, July 25th from 5pm - 8pm in THE DUMONT-SULLIVAN FUNERAL HOME, 50 FERRY ST. HUDSON. A funeral mass will be held on Tuesday, July 26th at 10am at St. John XXIII Parish in St. John the Evangelist Church, 27 Library St., Hudson. All may please meet at church. Burial will be in the Old St. Louis Cemetery, Nashua. In lieu of flowers, contributions may be made in Charlie’s loving memory to the MS Foundation, National Headquarters, Donations, 6520 North Adams Ave., Ft. Lauderdale, FL. 33309.

Charles Guill Jr., 89, of Francestown (formerly of Hudson) NH, died peacefully at his home on July 22, 2016. Charlie was born August 31, 1926 in Nashua to Charles and Yvonne (Mirault) Guill. He was inducted into the Navy in 1945. He attended... View Obituary & Service Information

The family of Charles Guill, Jr. created this Life Tributes page to make it easy to share your memories.