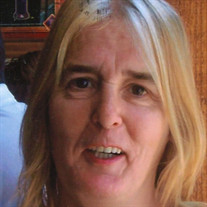 Cathy Lynn Gilman passed away on Friday, Sept 25, 2015 at the Lahey Clinic in Burlington, MA after a sudden illness. Cathy was born to and predeceased by Henry (Hank) and Celia Ostrowski in Rockville, CT. She had eleven brothers and sisters. Of those, she was predeceased by brothers Kevin, Gilbert (Gil) and Daniel (Bunky) and sister Patti. Remaining are sisters Nancy and Janet and brothers Mark, Timothy (Timmy), Michael, Steven (Tee-tee) and John (Jackie). Cathy leaves behind her husband Warren Gilman and her daughter Beverly Woodward, son in law Thomas Woodward and four grandchildren Hannah, Connor, Eli and Sebastian as well as a multitude of nieces and nephews and In-laws that will greatly miss her. Cathy made her home in Nashua in 1983 and has lived here ever since. Cathy worked at Beebe Rubber Company from 1983 until the plant closed in 2002 where she was employed as a laboratory technician. She made many friends there. Though her job was hard she missed working there. During these years, Cathy was very involved in the local Nashua Junior Women’s League, volunteering to help the community. In recent years Cathy continued to volunteer with organizations like NeuroblastThis and The Prostate Cancer Walk and The Color Run. After Beebe closed Cathy became more involved in her granddaughter’s life, starting a Brownie troop of which her granddaughter was a member. She followed her up through the different levels; Brownies, Juniors, Cadettes and Seniors/Ambassadors of Girl Scouts as leader of her troops. Cathy and her troops had many memorable times, her girls became like family to her. When they completed the level of Ambassadors, Cathy retired from the Girl Scouts and became more involved with her three grandsons. She was their Grammy-Nanny, shuttling them to and from school, bringing them to sports practices and swim lessons in the summer. She became involved as a volunteer at the elementary schools Ledge Street School and New Searles, enjoying every activity she could. Cathy kept her grandchildren busy with many activities in which she enjoyed being part of. Cathy became “Grandma’s taxi service” from the time her granddaughter was in dance, girl scouts, to soccer games, working and then graduating from high school. Her grandsons introduced basketball, wrestling, baseball and she couldn’t wait to see each game. The Red Sox and the Patriot’s became another favorite due to her son in law. Cathy loved to take drives and walks, bicycling and kayaking. She loved flowers and gardening, bird watching and butterflies. Cooking and baking was another love of Cathy’s. Holidays were filled with apple and pumpkin pies, golabki and pierogi’s, and many holiday decorations. Much of her favorite summer activities involved camping with her family. Visiting hours will be held on Thursday October 1st from 5pm - 7:30pm in the Dumont-Sullivan Funeral Home, 50 Ferry St., Hudson. A Service of Remembrance will be celebrated from 7:30 - 8pm in the Funeral Home.

Cathy Lynn Gilman passed away on Friday, Sept 25, 2015 at the Lahey Clinic in Burlington, MA after a sudden illness. Cathy was born to and predeceased by Henry (Hank) and Celia Ostrowski in Rockville, CT. She had eleven brothers and sisters.... View Obituary & Service Information

The family of Cathy "Mimi-Dee" Gilman created this Life Tributes page to make it easy to share your memories.