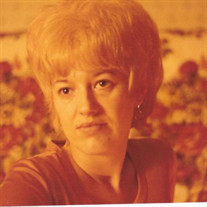 Carol E. Quigley, age 73, died on Thursday, June 23, 2016, at home with her husband William F. Quigley. She was born on June 27, 1942 in Lowell, Massachusetts to Clifford and Rita (Boucher) Jordan. Her biggest success was her family and friends. She was master of all trades, reproduction doll making, sewing, and antiquing with her Gram, knitting and crocheting and spending time and adventures with her grandchildren and great-grandchildren. There wasn’t anything she couldn’t do once she put her mind to it. She was known and loved for her devotion for the Veterans. She held Membership in the American Legion Auxiliary Unit 247 of Tyngsboro Massachusetts for 28 years she has served 15 years as Treasurer for ALA Unit 247. She served as an Executive committee member of  ALA Unit 247. She was active for many years in service to the veterans suppers served on a monthly basis at the American Legion Post 247 Tyngsboro. She served as a member & Officer of the American Legion Auxiliary Middlesex County District Five Inc. for 25 years. She served as Jr. Vice  Sr. Vice and held the office of Middlesex county District Five Director  (3) times in service.   She held the position of V.A.M.C. Edith Rogers Veterans Memorial Hospital Representative for many years. She held the position of Department of Massachusetts Membership Chairman for two years.   She had received many Awards for Outstanding service to the American Legion Auxiliary Department of Massachusetts and the American Legion Auxiliary National Organization. She followed in the foot steps of her mother, Rita Corey and her sister, Ruthann Musick, who were members of the American Legion Post 247 and American Legion Auxiliary Unit 247. She was a proud ALA Member in service and will be long remembered as such. After being appointed VAVS Representative at Bedford VA Medical Center in 2012, Carol had a vision to change the Christmas Gift Shop to give gifts to our hospitalized veterans in this facility, instead of sending gifts to their family members who seldom visited them. Many thought this was impossible, however Carol was advised to contact our National VAVS Chairman, Janet Jeffers. National thought this was a great idea and new concept. So in 2014 Carol started taking sizes and wishes in order to give two or three gifts to our hospitalized veterans. At the April Past Department President's Luncheon, Carol was presented a Citation from our National organization for her outstanding Volunteer accomplishments, On hand for this presentation was our National President, Sharon Conaster. Carol also served our Department of Massachusetts American Legion Auxiliary as Membership Chairman since 2012. Membership is the blood core of our organization, therefore a truly important committee. Carol, served as a District 5, Middlesex County Director and has been, presently serving as District Treasurer for several years. She is survived by her husband of 57 years, William F. Quigley, a daughter Marie E. Quigley, her children, Tatiana M. Terry, Chelsey L. Shepard and Taylor P. Ewen, a daughter CherylAnne Quigley, and her children, Brandon W. Brownell and Sean C. Brownell, great grandchildren, McKenzy , Joshua, Adaline, Abel and Ava. She is also survived by her brother, Herbert Jordan and many nieces and nephews. In lieu of flowers, donations may be made in Carol’s name to the Bedford VA Medical Center, in Bedford, MA and may be done so by using the following online link: https://www.pay.gov/public/form/entry/101/ All funeral services were private. To share an online message of condolence with the family, please visit www.dumontsullivan.com THE DUMONT-SULLIVAN FUNERAL HOME IN HUDSON WAS IN CHARGE OF ARRANGEMENTS

Carol E. Quigley, age 73, died on Thursday, June 23, 2016, at home with her husband William F. Quigley. She was born on June 27, 1942 in Lowell, Massachusetts to Clifford and Rita (Boucher) Jordan. Her biggest success was her family and... View Obituary & Service Information

The family of Carol Quigley created this Life Tributes page to make it easy to share your memories.