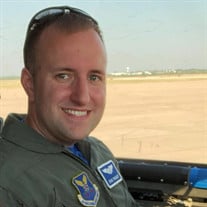 Captain Ryan S. Phaneuf, 30, assigned to the 37th Bomb Squadron at Ellsworth Air Force Base in South Dakota, formerly of Hudson, New Hampshire, died January 27th, 2020. Ryan was the co-pilot of the Bombardier E-11A that crashed in Ghazni Province, Afghanistan while serving his country on a voluntary deployment supporting Operation Freedom’s Sentinel. Born in Nashua, NH, June 4th, 1989, he was the son of Donald and Nancy Phaneuf of Hudson, NH. He was a graduate of Presentation of Mary Academy of Hudson in 2003. Ryan then graduated from Alvirne High School in 2007. During his time at Alvirne, his interest in joining the Air Force ignited. He enrolled in the first class of AFJROTC that was offered his freshman year and continued his involvement throughout his high school career. In 2006, Ryan was in the top 1% of 110,000 Junior ROTC cadets worldwide and was selected to attend the Aerospace & Technology Honors Camp at the University of Oklahoma and Tinker Air Force Base. In 2007, he was nominated to attend the National Youth Leadership Forum on Defense, Intelligence and Diplomacy in Washington, DC – an opportunity less than 1% of all high–achieving high school students are presented with. During his senior year, the departing class of 2006 unanimously decided that Ryan was to be assigned the highest rank offered in AFJROTC: Cadet Colonel. After his graduation from Alvirne in 2007, Ryan began his studies at Embry Riddle Aeronautical University (ERAU) in Daytona Beach, FL where he continued to pursue his military career as an AFROTC cadet throughout his college years. During these years, he completed a rigorous 4-week training program at Maxwell AFB, became a flight commander guiding underclassmen in leadership development and moved up to become a squadron commander responsible for the safety and accountability of the 350+ cadet wing members. In his senior year, Ryan was considered a super senior in the Eagle Wing Detachment and was given the position of Vice-President. Also in his later years at ERAU he was a member of the Arnold Air Society. In the fall of the 2011, Ryan was selected to attend Undergraduate Pilot Training (UPT), achieving one of his dreams. During his summer breaks, Ryan served two internships with BAE Systems, one of the largest Department of Defense contractors, getting a behind the scene look at what goes into developing the equipment used to “protect those who protect us.” In 2012, he completed his studies and earned a Bachelor of Science in Applied Meteorology. Ryan commissioned into the United States Air Force as a Second Lieutenant on May 12. Ryan moved to Laughlin AFB, TX in the Summer of 2012 for pilot training, beginning in the T-6A and transitioning to the T-38C. Upon graduation from pilot training in April 2014, Ryan was selected to become a T-6A instructor with the 85th Flying Training Squadron at Laughlin AFB. During this assignment, Ryan earned the callsign “Phantom” and carried multiple titles in addition to instructor pilot such as assistant chief of training, training officer, category check pilot, and flight scheduler. In June 2017, Ryan was assigned to Dyess AFB where he joined the 28th Bomb Squadron to learn to fly the B-1B bomber. Ryan finished B-1B Basic Qualification at the top of his class, earning the title of Distinguished Graduate in June 2018. From there, Ryan was assigned to the 37th Bomb Squadron at Ellsworth AFB, SD and later earned the callsign “FOGG”. He was the assistant flight commander of scheduling where he executed the squadron’s Flying Hour Program and Ready Aircrew Program for 14 B-1B’s and 71 aircrew. In November 2019, Ryan completed school for the Bombardier E-11A ahead of his voluntary deployment with the 430th Expeditionary Electronic Combat Squadron at Kandahar Airfield, Afghanistan. Throughout his career, Ryan flew four different aircraft accruing over 1,300 flight hours. Ryan was a very quiet and extremely humble person with a sly sense of humor. He had a deep love for his family and friends. In August of 2013, he met his future wife, Megan, at Easterwood Airport in College Station, TX while on a cross-country trip as a T-6A student. Ryan and Megan were married three years later on November 18th, 2016 in a private ceremony in Del Rio, TX. He had a love for music, was a self-taught guitarist, and used music as a way to express himself. In his spare time Ryan liked to attend concerts with close friends and aimed to visit as many NFL stadiums as he could. He loved spending time with his wife, Megan, and their two adopted dogs, Bandit and Peanut. Ryan was a beloved son, husband, brother, nephew, grandson, uncle, co-pilot, instructor, and friend to many. In addition to his parents, Donald and Nancy Phaneuf, he is survived by his wife Megan Phaneuf, sister Christina Larsen, grandmothers Claire Phaneuf of St. Petersburg, FL and Sue Munroe of Dunnellon, FL, as well as several uncles, aunts, and cousins. Ryan spent his life striving to be the best he could be and always wanted to help the people around him accomplish the same. As a genuinely humble person, Ryan is a true representation of small-town dreams coming true. Visiting hours will be held on Friday, February 28 from 1 p.m. to 8 p.m. in St. Kathryn’s Church, 4 Dracut Road in Hudson, NH. A Mass of Christian Burial will be held on Saturday, February 29 at 10 a.m. in St. Kathryn’s Church. Ryan will receive full military honors in a private burial at Arlington National Cemetery on March 9, surrounded by family and friends. In lieu of flowers, donations may be made to the Air Warrior Courage Foundation (AWCF). The AWCF will support the family of Captain Phaneuf in any way needed. To make a donation, go to www.AirWarriorCourage.org, use the blue “DONATE” button on the home page. Click the “GIVE DIRECT” at the top right. This will take you to the donations page. Select “I would like to dedicate my donation to someone special”. Under “SELECT A PROGRAM” please select “AWCF”. In the “COMMENTS” block include that the donation is in Memory of Captain Ryan S. Phaneuf. This guarantees funds are distributed correctly.

The family of Capt. Ryan S. Phaneuf created this Life Tributes page to make it easy to share your memories.