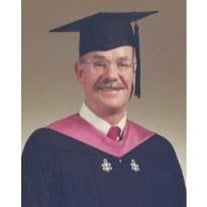 Byam (Bing) Whitney Jr., 84, of Nashua, died peacefully on Monday, April 25, 2011 at St. Joseph hospital in Nashua, New Hampshire after a brief illness. “Bing”, as he was affectionately known, was born in Boston February 14, 1927, the son of the late Byam Whitney and Madeleine Brewer Whitney Russell. He had resided in Milton, Massachusetts for most of his life before moving to Nashua in 2001. Byam graduated from Milton Academy in Milton Massachusetts, class of 1945. He went on to Harvard where he earned a Bachelor’s Degree; class of 1949 and 1979. On October 20th, 1956 Byam married Miriam Jeffries at the First Parish Unitarian Church in Milton, Massachusetts. Mr. Whitney served in the US Army from December 27th, 1951 until December 4th, 1954, when he was honorably discharged as a Sargent. During the Korean War Byam was stationed in Japan for two years during which time he developed a passion for the Japanese culture and language. Mr. Whitney enjoyed a successful career as a stockbroker for many years in Boston, where he consistently exceeded sales goals resulting in many wonderful trips with his wife around the world. Byam had many interests which included playing the bagpipes. He wrote a song, “The Pipers’ Salute to his Daughter”, after the birth of his first born daughter, Laura. His daughters lovingly remember the story their father told of briefly capturing the attention of Queen Elizabeth while playing the bagpipes along the route of her procession through Boston. Byam and Miriam enjoyed singing in both the Milton and Quincy, Massachusetts Choral Societies. Both had a love of classical music and actually first met while singing. His daughters fondly remember their parents rehearsing their singing parts for Handel’s Messiah at home during the Christmas season, taking turns accompanying each other on the piano. Byam had a lifelong love of learning and remained “teachable” right up until his passing. He was a student of history and the classics who also enjoyed the study of various languages including Greek. Even in his later years, he could easily recite from memory long passages of Shakespeare, Kipling, and others. He always had the appropriate words for an occasion or situation. He enjoyed studying Naval and Civil War history. He loved classical music. One of the proudest moments of his life came in 1979 when he completed his Harvard degree after four years of night school while working full time and supporting his family. The family enjoyed many summers on Naushon Island, off Cape Cod, where Byam taught his daughters to sail Herreshoff 12 footers. They also vacationed in Chatham, Massachusetts and enjoyed time spent at his mother’s summer home in Princeton, Massachusetts. Other fond memories include a trip to Nova Scotia in the 70’s to see the total eclipse of the sun. Byam was an avid fan of Harvard Football, having held season tickets for many years. While living in Massachusetts, the license plate on his car read “HY2929”, a reference to the famous Harvard Yale game of 1968 when Harvard “beat” Yale 29-29. Prior to moving to Nashua, Byam was a lifelong member of the First Parish Unitarian Church in Milton, Massachusetts. While living in Nashua Byam attended the Church of the Good Shepherd. He was a member of the Harvard Lodge where he was a Freemason for over 50 years. He belonged to numerous other societies, clubs and groups, including The Society of Colonial Wars and The Milton Hoosic Club. Mr. Whitney was predeceased by his sisters Jane Van Voorhis, Dorcas McGoodwin, and Rosamond Whitney Kelsey. He is survived by his wife Miriam to whom he was married for 54 years; three daughters, Laura Fidone and her husband Joseph, of Amherst, New Hampshire, Heather Whitney of Framingham, Massachusetts and Gwendolyn D’Amico and her husband Michael of Nashua New Hampshire; 5 grandchildren; Rachael Cooper, Madeline Cooper, Anthony D’Amico, Zachary D’Amico, and Elizabeth D’Amico, and many nieces and nephews. The daughters wish to extend their heartfelt thanks to their Dad’s caregivers and staff at Langdon Place of Nashua, Greenbriar Terrace Healthcare of Nashua, and St. Joseph hospital. Byam had been a friend of Bill’s since July 6th, 1963; over 47 years. Visiting Hours will be held on Friday April 29th from 5:00pm-7:00pm with a Prayer Service at 7:00pm and a Masonic Service at 7:30pm in the DUMONT-SULLIVAN FUNERAL HOME, 50 FERRY ST. (Rte 111) IN HUDSON, NH. Burial and a Memorial Service will be held at a later date. In lieu of flowers the family requests donations be made in Byam’s loving memory to The Wilson House, P.O. Box 46, East Dorset, VT 05253.

Byam (Bing) Whitney Jr., 84, of Nashua, died peacefully on Monday, April 25, 2011 at St. Joseph hospital in Nashua, New Hampshire after a brief illness. “Bing”, as he was affectionately known, was born in Boston February 14, 1927, the son... View Obituary & Service Information

The family of Byam Whitney, Jr. created this Life Tributes page to make it easy to share your memories.