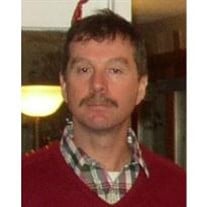 Brian R. McMahon, 52 of Nashua, died Saturday, August 22, 2009 at UMass Medical Memorial Hospital in Worcester, MA. He was born May 4, 1957 in Nashua, son of Muriel (Bonnette) McMahon of Milford and the late John A. McMahon. Brian was the husband of Cheryl (Barrett) McMahon of Nashua with whom he shared 20 years of marriage. He was motorcycle enthusiast and enjoyed riding all over New England with his son on the back and his dear brother and friends at his side. Brian loved classic cars and enjoyed tinkering on them, especially his 1972 LTD Convertible. He was also an avid golfer. Brian was employed with Nashua Corp. for 27 years and was recently employed with Elm Street Jr., High School as a custodian, a position which he took great pride in. He was also an occasional lector at Parish of the Resurrection, of which he was a parishioner. Besides his loving wife and mother, survivors include a son; Matthew McMahon of Nashua. Four brothers and three sisters in law; Stephen and Encarnita McMahon of Spain, Joseph and Anne McMahon of Marshfield, MA, Andrew and Kellene McMahon of Milford, NH, and James McMahon of Allentown, PA. One sister and a brother in law; Eileen and Dennis Rodier of Francestown, NH. Two cousins who were like a brother and a sister; Anne Goudreau of Hudson and Robert Goulette of Riverside, CA. As well as several in laws, nieces, nephews, and cousins. Visiting Hours will be on Tues. Aug. 25th from 5-8pm in THE DUMONT-SULLIVAN FUNERAL HOME, 50 FERRY ST. IN HUDSON. A Funeral Mass will be celebrated on Wed. Aug. 26th at 10am in the Parish of the Resurrection, 449 Broad St., in Nashua. All may meet at church. Burial will be in the Lithuanian Co-op Cemetery in Nashua.

Brian R. McMahon, 52 of Nashua, died Saturday, August 22, 2009 at UMass Medical Memorial Hospital in Worcester, MA. He was born May 4, 1957 in Nashua, son of Muriel (Bonnette) McMahon of Milford and the late John A. McMahon. Brian was... View Obituary & Service Information

The family of Brian Robert McMahon created this Life Tributes page to make it easy to share your memories.