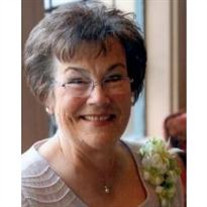 Brenda (McIntosh) Birck, 65, of Nashua, NH died Sunday, March 15, 2009 at the Community Hospice House of Merrimack in the loving care of her family after a courageous battle with cancer. She was born March 24, 1943 in Lawrence, MA, daughter of the late George and Anna (Eccles) McIntosh. She was also predeceased by an infant son; Scott George Birck and a sister; Ann Tinkham, formerly of Salem, NH. Brenda was the beloved wife of Daniel Birck of Nashua with whom she shared 35 years of marriage. Besides her dear husband survivors include a son Daniel Birck and his wife Maryanne of San Francisco, CA. A daughter Amy Birck of Baltimore, Maryland. Also a sister and a brother in law Cheryl and Gerry Leblanc of Salt Springs, Florida. As well as many extended family members including beloved aunts, cousins, nieces, nephews, in-laws, and many, many dear friends that were considered family. These people provided tremendous support to the family over Brenda’s extended illness. Brenda was a secretary for the MITRE Corporation in Bedford, MA and a technical librarian at the former Brookside Hospital in Nashua. She remained in library work for 13 years at Rivier College in Nashua, from which she retired in 2006. Brenda, along with Dan, was a member of the Immaculate Conception FOCUS Marriage Planning Program where they enjoyed meeting with couples planning their marriage. She enjoyed playing golf as a member of the BAE Systems Ladies League and spending time with her family and many, many wonderful friends. Brenda had a deep faith in God and could certainly be described as “the best wife, Mother, and friend anyone could have ever met.” She will be greatly missed by the many that were lucky to know her. Visiting Hours will be on Tues. March 17th from 4-8pm in the DUMONT-SULLIVAN FUNERAL HOME IN HUDSON. A Funeral Mass will be celebrated on Wed. March 18th at 10am in Immaculate Conception Parish, 216 East Dunstable Rd., in Nashua. All To Meet At Church. Following Mass, cremation will take place with final burial in Calvary Cemetery in Quincy, Illinois. In lieu of flowers donations may be made in Brenda’s loving memory to either the Rivier College Library, 420 South Main St., Nashua, NH 03060, Immaculate Conception Parish, 216 East Dunstable Rd., Nashua, NH 03060 or Community Hospice House in care of Home Health & Hospice, 22 Prospect St., Nashua, NH 03060.

Brenda (McIntosh) Birck, 65, of Nashua, NH died Sunday, March 15, 2009 at the Community Hospice House of Merrimack in the loving care of her family after a courageous battle with cancer. She was born March 24, 1943 in Lawrence, MA, daughter... View Obituary & Service Information

The family of Brenda (McIntosh) Birck created this Life Tributes page to make it easy to share your memories.