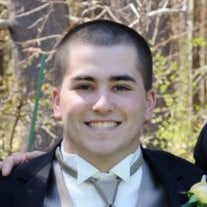 Brandon Michael Masterson, 20, of Hudson, NH died March 22, 2013 at Massachusetts General Hospital, Boston, MA surrounded by loving family after being in an automobile accident on March 16th. Brandon was born in Nashua, NH on February 24, 1993 son of Pete Masterson and Nicole Emerson. Brandon was predeceased by his paternal grandfather Charles P. Masterson in 2000. Brandon graduated from Alvirne High School class of 2011 where he played on the Football team for four years. He loved snowboarding, hunting, and automobiles. His best friend in the world is Andrew Ocasio who was also severely injured in the same accident with Brandon. Brandon is survived by his father and stepmother, Pete and Holly Masterson of NH and his mother, Nicole Emerson of Hudson, NH; a paternal grandmother Ruth Masterson of Hudson, NH; maternal grandparents Donald Emerson and Darlene Parkhurst of Hudson, NH and Jane Emerson of Boston, MA; a sister, Hayley Flaherty of Hudson, NH; several aunts and uncles, Bernie Masterson and his wife Stephanie of Hudson, NH, Diana Paquette and her husband Jeff of Nashua, NH, Brandi and Matthew Hunt of Merrimack, NH and Michelle Parkhurst and Randy Wyman of Hudson; extended family, Norbert and Linda Johnson of New London, NH, Norbert and Monique Johnson of North Andover, MA, Harold and Cherie Shaw of Bow, NH and many cousins and dear friends. VISITING HOURS WILL BE HELD IN THE HUDSON FUNERAL HOME ON THURSDAY, MARCH 28TH FROM 4PM-8PM. A SERVICE OF REMEMBRANCE WILL BE HELD ON FRIDAY MARCH 29TH AT 11AM IN THE BISHOP GUERTIN HIGH SCHOOL GYMNASIUM , 194 LUND ROAD IN NASHUA. ALL MAY MEET AT 10:30AM AT BISHOP GUERTIN. FOLLOWING CREMATION, BURIAL WILL BE HELD IN THE SPRING. DONATIONS: IN LIEU OF FLOWERS THE FAMILY ASKS THAT YOU PLEASE CONSIDER MAKING DONATIONS TO ASSIST WITH MEDICAL AND REHAB EXPENSES FOR ANDREW OCASIO. AN ACCOUNT IS CURRENTLY BEING SET UP FOR THIS FUND AT A LOCAL CREDIT UNION. PLEASE CHECK BACK FOR AN ACCURATE ADDRESS TO SEND THESE FUNDS.

The family of Brandon M. Masterson created this Life Tributes page to make it easy to share your memories.