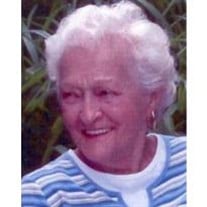 Blanche (Othot) O’Rourke, 87 of Nashua, died Saturday, February 14, 2009 at the Southern New Hampshire Medical Center in Nashua surrounded by her loving family. She was born June 18, 1921 in North Stratford, NH, daughter of the late John and Louise (Bernier) Othot. She was the wife of William J. O’Rourke, Sr. who died in March of 1998. She was also predeceased by 11 brothers and sisters. Blanche was a WWII Army Veteran. Following her honorable discharge from the military, she held employment at various Nashua merchants and lovingly raised her family. She later was employed by the City of Nashua, working in the Code Enforcement Dept. for over 20 years. Upon retirement in 1995, Blanche enjoyed her retirement years traveling and spending time with her family. She will be remembered as the best wife, mother, grandmother, and friend that anyone could have. Her greatest joy came in the form of caring for others and placing everyone else first in her life. She is survived by her loving family, which includes; two sons and a daughter in law; Michael and Sandra O’Rourke and William O’Rourke, Jr. all of Nashua. Two daughters and a son in law; Nancy Jelley of St. Mary’s GA, Susan and Thomas McCarthy of Amherst, NH. Seven Grandchildren; Sara, Johnathan, Valerie, Christopher, Michael, Caitlen, and Brennan. Two great grandchildren; Emily and Samantha. A sister in law; Alyce Othot of Nashua and many nieces, nephews, and cousins. Visiting Hours will be held on Tues. Feb. 17th from 5-8pm in the DUMONT-SULLIVAN FUNERAL HOME, 50 FERRY ST., IN HUDSON. A Funeral Mass will be celebrated on Wed. Feb. 18th at 10am in St. Patrick’s Church, 29 Spring St., Nashua. All May Meet At Church. Burial will be in St. Patrick’s Cemetery. In lieu of flowers the family encourages donations to Corpus Christi Food Pantry And Assistance, 43 Franklin St., Nashua, NH 03064.

The family of Blanche (Othot) O'Rourke created this Life Tributes page to make it easy to share your memories.