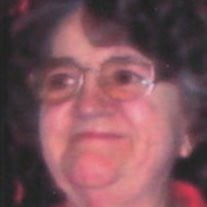 Beverly (Pierce) McMahon, 78 of Pelham, NH died on Wednesday April 3rd at Greenbriar Terrace Nursing Facility in Nashua, NH Surrounded by her loving family. Beverly was born on July 11, 1934 in Nashua, NH daughter of the late Theodore and Emma (Martin) Pierce. Beverly was also predeceased by a son, Mark McMahon; a grandson, Ryan D. McMahon and three brothers, Buddy, Robert and Ronald Pierce. Beverly was the loving wife of Walter C. McMahon for many years before his passing in 2007. Beverly was a wonderful mother and grandmother. Beverly loved kids, so after her career in electronics she she became a nannie and raised three generations of children and remained a part of their lives into adulthood. Among Beverly's many skills and talents, was here ability to sew. She loved crafting and sewing for pleasure and for work on the side. Beverly is survived by three sons Michael McMahon of Pelham, NH, Martin McMahon of Florida and Matthew McMahon and longtime girlfriend Leah Trimm of Pelham, NH; two daughters Kathryn Olson of Auburn, NH and Lisa Conley, Manchester, NH; a brother George Pierce of FL; a half-brother, Paul Salvail of Merrimack, NH; a half-sister, Betty-Jo Overton of Merrimack, NH; Seven grandchildren and four great-grandchildren. Visiting hours will be held on Wednesday April 10th from 5 - 7:30pm in the DUMONT-SULLIVAN FUNERAL HOME, 50 Ferry St., Hudson. A Prayer Service will be held immediately after beginning at 7:30pm in the Funeral Home. Burial will be held at a later date. the family has requested that donations be made to: The Parkinson's Disease Foundation, 710 West 168th Street, New York, NY 10032.

The family of Beverly McMahon created this Life Tributes page to make it easy to share your memories.