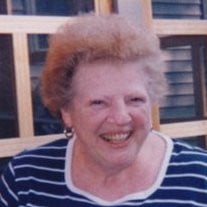 Beverly June (Hickey) Keenan, 81 of Hudson, NH, died Monday June 17, 2013 at the Southern NH Medical Center in Nashua. She was born in Portsmouth, NH on July 20, 1931 and resided in NH for most of her life. Beverly was predeceased by her husband of 51 years, Paul Duffy Keenan and her son, Capt. Peter J. Keenan. She leaves behind 7 children, Michael Keenan of Newburyport, MA, Thomas Keenan and wife Pamela of North Carolina, Maureen Lessard of Amherst, NH, Sheila Jette and husband, Rene with whom she resided, Patrick Keenan of Candia, NH, Kevin Keenan and wife Ruth of Danville, NH, Carolyn Wright and her husband Michael of Dalton, MA. She was a proud and loving grandmother of 14 grandchildren: Amy Herner, Heather Ventresco, Peter Keenan, Christine Keenan, Monica and Angela Lessard, Tricia Jette-Gonthier, Joanna Maskaluk, Cynthia Binari, Patrick and Brendan Keenan, Timothy and Alyson Keenan and Jacob Wright, as well as 9 great grandchildren and a daughter in law, Louise Keenan of Nashua. Beverly was a member of the Hanna Dustin Quilting Guild and will be missed by her beloved quilting sisters, the Cut Ups. She will be remembered for her artistic flair, singing, sense of humor and words of wisdom, but above all else, for her unfailing love for her family and friends. Visiting hours will be held on Wednesday June 19th from 6pm to 8pm in THE DUMONT-SULLIVAN FUNERAL HOME, 50 FERRY ST IN HUDSON. A Mass of Christian Burial will be celebrated on Thursday, June 20th, at 11 am at Blessed John XXIII Parish in St John the Evangelist Church, 25 Library Street, in Hudson. All may meet at church. Burial will be private and held at a later date. In Lieu of flowers, the family encourages donations be made in Beverly’s loving memory to Community Resources for People with Autism, 100 North Street, Suite 322, Pittsfield, MA, 01201.

Beverly June (Hickey) Keenan, 81 of Hudson, NH, died Monday June 17, 2013 at the Southern NH Medical Center in Nashua. She was born in Portsmouth, NH on July 20, 1931 and resided in NH for most of her life. Beverly was predeceased by her... View Obituary & Service Information

The family of Beverly Keenan created this Life Tributes page to make it easy to share your memories.