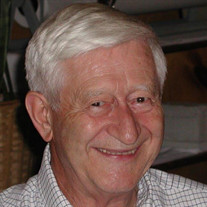 Bernard “Bernie” Manor, 78, passed away on October 12, 2016 at his home in Hudson surrounded by his family. Bernie was born August 18, 1938 in Burlington, VT to the late Clarence & Clara Manor. He was raised in Jericho, VT and later worked for the U.S. Army Corps of Engineers in MA and CT for 35 years. He moved with his family to Hudson in 1975. Retiring in 1994, he worked at his favorite hobby, rebuilding vehicles for his family and friends. One of his favorite accomplishments was visiting all fifty states. Bernie volunteered as a member of the Hudson planning board and Municipal Utility Committee. He also served as the Clerk of the Works for the Town of Hudson for new construction projects. He was named the Hudson Chamber of Commerce Citizen of the Year in 2013. Survivors include his wife of 57 years, Kathy, four children, Lori Underwood and her husband JT of New London, NH, Larry Manor and his wife Sherill of Londonderry, NH, Peter Manor and his wife Jennifer of Londonderry, NH, and Patrick Manor of Rye, NH; Six grandchildren, Austin, Nolan, Reece, Ashley, Henry, and Charlotte and two great grandchildren, Milo and Ksenia; Four sisters Lea Listzwan of Tracys Landing, MD, Coleen Hotchkiss and her husband Douglas of Fairport, NY, Carolyn Moreau and her husband Donald of Duxbury, MA and June Taylor of Jericho, VT. The family would like to thank everyone at Norris Cotton Cancer Center in Nashua, NH as well as Home, Health, and Hospice of Merrimack, NH. Visiting hours will be held on Saturday, October 15th from noon -3pm in the DUMONT-SULLIVAN FUNERAL HOME, 50 FERRY ST., IN HUDSON. Burial will be private. In lieu of flowers, memorial donations in Bernie’s name may be made to either the Norris Cotton Cancer Center 2300 Southwood Drive, Nashua, NH 03063-1818 or Home Health & Hospice Care, 7 Executive Park Drive, Merrimack, NH 03054.

The family of Bernard "Bernie" Manor created this Life Tributes page to make it easy to share your memories.