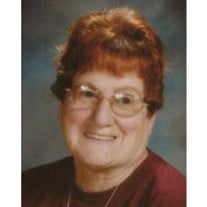 Barbara Joan Almeida, 74, of Hudson died at St. Josephs Hospital in Nashua on Saturday, February 6th, 2010, following a courageous battle with lung cancer. She was born July 22, 1935, in Dracut, MA, daughter of the late Cyril and Hazel Spencer. Barbara resided in Hudson with her daughter and son-in-law for eleven years. Previously, she resided in Nashua and Dracut. She was predeceased by her husband Joseph Edward Almeida who died in 1994. She graduated college at the age of eighteen with a degree in Engineering, and worked for Honeywell. She later retired from Teradyne in Nashua after twenty-five years of service. She recently worked in food service at Alvirne High School for the past seven years where she was affectionately known as “Nana” to hundreds of students. She was an avid supporter of Alvirne High School’s “Friends of Music” and ROTC programs. Survivors include her daughter and son-in-law, Robert and Karen Sarno of Hudson, her son and daughter-in-law, Kevin and Mary Almeida of Deerfield, NH and her son and daughter-in-law, Stephan and Sandra Almeida of Pflugerville, TX , as well as her grandchildren, Angela, Kayla, and Shaela Sarno of Hudson, and Erica and Joseph Almeida of Deerfield. Memorial Visitation will be held on Friday, February 12th from 7pm -8:30pm in the DUMONT-SULLIVAN FUNERAL HOME, 50 FERRY ST. IN HUDSON. A Prayer Service will be held in the Funeral Home at 8:30pm. In lieu of flowers the family encourages donations in Barbara’s loving memory to either St. Jude Children's Research Hospital, 501 St. Jude Place, Memphis, TN 38105 or Make A Wish Foundation of NH, 814 Elm St., Ste. 300, Manchester, NH 03101.

The family of Barbara Joan Almeida created this Life Tributes page to make it easy to share your memories.