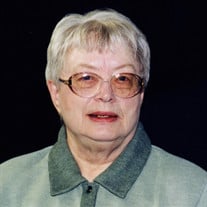 Barbara M. Smith, age 87, of Lake Odessa MI, passed away June 26, 2015, at the Community Hospice House in Merrimack, New Hampshire. She had resided at her daughter Susan’s home in Hudson, NH for most of the previous year. Her family was at her side. She was born June 15, 1928, in Belding, Michigan, the daughter of Harold and Hazel (Eargood) Updike. Barbara attended schools in Belding, Michigan and graduated valedictorian of the class of 1946. Barbara married David D. Smith (of Ionia Michigan) on October 10, 1953, in Belding, Michigan. David passed in January 2011. They were married 57 years. During their life together, they lived in Grand Rapids, Kalamazoo, Sand Lake, Cedar Springs, Trufant, and lastly, Lake Odessa, MI. Barbara worked for many years at the Fideler Publishing Company of Grand Rapids Michigan. Her organizational and secretarial skills were much appreciated there. Barbara was a lifetime member of Jackson-Mutschler VFW Post 4461 Ladies Auxiliary in Lake Odessa. She enjoyed playing a supporting role in the goals of the auxiliary to support veterans and those currently serving in the armed forces. Barbara will long be remembered for her fancy crochet work and the crocheted snowflakes that she sent in her Christmas cards. David and Barbara spent their retirement years in Lake Odessa, where they enjoyed watching the wildlife around their lake and the many friends they made in the community there. She was preceded in death by her husband David and a brother Richard Updike. She is survived by daughters Rebecca Ruttan and her husband Duane of Williamsburg, Michigan and Susan Gould and her husband Thomas of Hudson, New Hampshire; four grandchildren; and five great grandchildren, as well as by her brother Thomas Updike and his wife Sharon of Comstock Park, MI and a sister in law Marge Updike of Florida. Visitation with the family will be held on Monday, June 29th from 6pm - 8pm in THE DUMONT-SULLIVAN FUNERAL HOME, 50 FERRY ST. HUDSON, NH. A delayed funeral service for Barbara will be held in Michigan at Koops Funeral Chapel - Lake Odessa. A private interment will be at Woodland Memorial Park. In lieu of flowers, memorial contributions in Barbara’s name may be directed to either the Community Hospice House, Development Office, 7 Executive Park Drive, Merrimack, NH 03054, Or the Jackson-Mutschler VFW Post 4461, 3600 West Tupper Lake Road, Lake Odessa, MI 48849 (www.vfwpost4461.org)

Barbara M. Smith, age 87, of Lake Odessa MI, passed away June 26, 2015, at the Community Hospice House in Merrimack, New Hampshire. She had resided at her daughter Susan&#8217;s home in Hudson, NH for most of the previous year. Her family... View Obituary & Service Information

The family of Barbara Smith created this Life Tributes page to make it easy to share your memories.