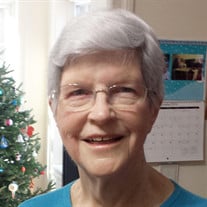 Barbara Claire (Stinson) Moran, 84, died August 17, 2017, in Hudson, N.H.   Barbara was born February 1, 1933, in Lynn, Mass., the eighth of eleven children, to Harry W. and Margaret (Gillespie) Stinson.  She graduated from St. Mary’s Girls High School in Lynn in 1951, and continued her education to graduate from the Stenotype Institute of Boston.   On September 6, 1954, Barbara was married to John F. Moran III in Dallas, Texas. At the time of her passing, she was just a few weeks away from celebrating the anniversary of their 64th year of marriage, an adventure that led them from Texas to Chicago to Syracuse, N.Y. to Clinton, N.Y. to Nashua, N.H. to Hudson, N.H. Along the way, Barbara was an active volunteer for many charitable organizations, including Hospice, Catholic Charities, Catholic school programs, and most recently the Day Away program for the memory-impaired at Mission Pointe. She was also a homemaker and dedicated mother of four, grandmother of nine, great-grandmother of two; and aunt, sister-in-law and friend to many.   Barbara is survived by her husband, John; her children John F. Moran IV (Kathryn) of Manchester, N.H.; Mary B. Williams of Sauquoit, N.Y.; Michael J. Moran (Theresa) of Saratoga Springs, N.Y.; and Eileen M. Moran of Oswego, N.Y.   She is also survived by her sisters Mona Stinson of Haverhill, Mass., and Margaret M. Stinson CSJ of Framingham, Mass.; her brother George Stinson of Sea Bright, N.J.; sister-in-law Mary Stinson of Curtis Bay, Md; grandchildren Courtney Moran Argiras, Jessica Moran Stevens (Michael), Ellen Desimone, Ryan Desimone, John F. Moran V, Carly Moran, Amy Baker, Wyoma Crandall and Michael J. Moran Jr.; and great-grand-daughters Eleni and Sophia.   Barbara was predeceased by her parents; brothers Harry W. Stinson, John A. “Jack” Stinson and Donald J. “Duck” Stinson; sisters Mary Malone, Helen Fleming, Dorothy Stinson CSJ and Michele Mulhern. She was also predeceased by sisters-in-law Evelyn Stinson and Ann Stinson, and brothers-in-law William Malone, Leonard Fleming and John Emmett Mulhern.   Barbara’s family wishes to thank the staff of the Fairview Nursing Home in Hudson for their wonderful care and generous hearts.   A funeral mass will be held on Wednesday, August 23 at 11 a.m. in the Immaculate Conception Church of Nashua, N.H., 216 E. Dunstable Road. There will be no calling hours. Burial will be held privately at a later date. Because Barbara held so many charities dear, in lieu of flowers it is requested that donations be made to a charity of your choice.

The family of Barbara Moran created this Life Tributes page to make it easy to share your memories.