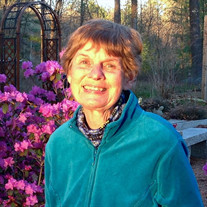 Barbara Ann Kalb, 80 of Nashua, New Hampshire died Tuesday, April 7, 2015 at the Inn at Fairview following a lengthy decline from Alzheimer's. She was born October 29, 1934, in Brooklyn, NY, daughter of the late William and Mary (Serafin) Bleier.  Barbara was the wife of Christian J. Kalb of Nashua, with whom she shared 57 years of marriage.  Barbara was happiest spending time with her family. She enjoyed traveling, was very patriotic and had an overall love of life.  She was a completely selfless person, and everything she did was in one way or another to help others. Besides her loving husband Christian, she is survived by two sons; Christian W. Kalb and his wife Andrea of Yardley, PA, Jeffrey Kalb and his wife Joann of Cleveland, TN, a daughter; Nancy Palmer of Amherst, NH, five grandchildren; Hannah Kalb, Megan Kalb, Zachary Kalb, William Kalb, and Davis Palmer, two sisters; Nancy Roinnel and her husband Jules of Chesterfield, VA, Patricia Carlson and her husband Cliff of Bozeman, MT, as well as a niece, several nephews, an uncle, and two cousins. Visiting hours will be held on Monday, April 13th from 4pm-6pm in THE DUMONT-SULLIVAN FUNERAL HOME, 50 FERRY ST. IN HUDSON. Following cremation, burial will be held at a later date. In lieu of flowers the family encourages donations be made in Barbara’s loving memory to www.alz.org/join_the_cause_donate.asp (then click Tributes).

The family of Barbara Kalb created this Life Tributes page to make it easy to share your memories.