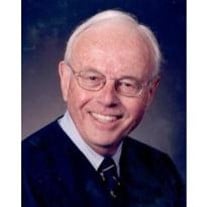 Arthur O. Gormley, Jr. entered into eternal life on March 15, 2009. Mr. Gormley was born to the late Arthur O. Gormley, Sr. and Esther Bachman Gormley on October 30, 1931 in Englewood, NJ. He graduated from Bergenfield High School in 1949 as president of his class and the lead in the senior class play. He attended Rutgers University and graduated in June 1953. Mr. Gormley married his wife of 54 years, Armelle Simoneau Gormley on September 25, 1954. They fell in love when he took her hand to help her into a pick up truck to attend a bonfire at Hampton Beach. During the Korean Conflict he served in the Air Force. Mr. Gormley held a full-time job while enrolled at Boston College Law School. He received his Juris Doctorate degree in June 1960. He often said it was a time when the law school was looking for warm bodies to fill seats. He was an Alderman in the City of Nashua and served as City Solicitor. In February of 1971 he was appointed as Special Justice of the Nashua District Court. He sat on the bench until October 2001 when he returned to the full-time practice of law on Main Street in Nashua. He was a bridge player, puzzle maker and an avid collector of antiquarian maps. He liked listening to jazz while enjoying an occasional extra dry martini. He enjoyed reading, was a history buff and traveled the world with his wife. Mr. Gormley treated every person he met with dignity, decency and respect. He was fair to a fault. Mr. Gormley was predeceased by his son, Jeffrey N. Gormley. He is survived by his wife, Armelle Simoneau Gormley; his brother, Dr. David P. Gormley of Herndon, Virginia; and his children, Cheryl Gormley White and her husband Bradford White; Arthur O. Gormley, III and his wife Eileen Gormley; Lawrence A. Gormley and his wife Susan Gormley; Lia Gormley Cote and her husband Jeffrey Cote; eight grandchildren and several nephews. Visiting Hours will be held on Thurs. March 19th from 5pm-9pm in the DUMONT-SULLIVAN FUNERAL HOME, 50 FERRY ST., IN HUDSON. A funeral mass will be celebrated on Fri. March 20th at 10am in St. Patrick’s Church, 29 Spring St. in Nashua. All May Meet At Church. Burial will be in St. Louis Cemetery, Nashua. In lieu of flowers please consider a donation to New Hampshire Legal Assistance, 21 East Pearl Street, Suite 2, Nashua, NH 03060-3407.

The family of Arthur O. Gormley, Jr. created this Life Tributes page to make it easy to share your memories.