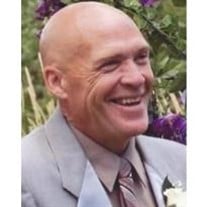 Arthur G. Cranshaw, 60 of Salem, NH, died Thursday October 13, 2011 at Brigham & Women’s Hospital in Boston following a courageous battle with cancer. He was born September 11, 1951 in Brookline, MA son of the late Albert R. Cranshaw and Mary (Frappier) Lambert and her husband Roger Lambert of Lowell. Arthur was the husband of Joanne Deveau Cranshaw of Salem, NH. Arthur was an accomplished carpenter who always had a smile on his face. He was also a gifted musician who played in several bands over the years and always surrounded himself with the music industry. He enjoyed riding motorcycles, fishing and playing golf and will be remembered for his great personality and his caring ways. Besides his loving wife Joanne and his dear mother Mary, survivors include a son John Francis Hauser, Jr. of Manchester, NH, a daughter Michelle June Hauser of Merrimack, NH, three grandchildren Devin St. Gelias of Weare, NH, Andrew Hauser of Merrimack, Brendan Burne of Merrimack, a brother Ron Cranshaw and his wife Donna of Raymond, NH, three sisters Teri Matthews and her husband Rick of Billerica, MA, Alma Mattucci and her husband Tony of Bridgton, ME, Deb Greenfield and her husband Ben of Seattle, WA. As well as many dear nieces, nephews, and cousins. Visiting Hours will be on Tues. Oct. 18th from 5pm-7:30pm with a Service of Remembrance at 7:30pm in THE DUMONT-SULLIVAN FUNERAL HOME, 50 FERRY ST. IN HUDSON. Following Cremation, burial will be private. In lieu of flowers the family encourages donations be made in Arthur’s loving memory to the Dana-Farber Cancer Institute, Multiple Myeloma Fund, P.O. Box 849168, Boston, 02284-9168.

The family of Arthur G. Cranshaw created this Life Tributes page to make it easy to share your memories.