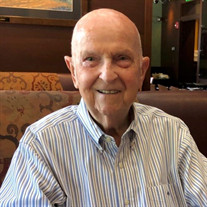 Arthur W. Farley Jr., 90, of Nashua, NH, and formerly of Chelmsford, MA and Watertown, MA, died peacefully on May 2, 2021 in Nashua, following a brief illness.  He was born September 6, 1930, in Boston, MA, son of the late Arthur W. and Elizabeth (Harrington) Farley. He was also predeceased by his wife, Margaret “Marnie” Farley in 2017, and a daughter, Alyson Morrison, in 2005.  Arthur was the loving husband of Marnie, with whom she shared 61 years of marriage. He was the treasured father of Arthur W. Farley III of Merrimack, NH and Melinda Farley Wood of Nashua, NH, the beloved grampa of Matthew Morrison, Patrick Morrison, Christopher Farley, and Paige Farley, as well as dear great grandfather to Rylee Morrison, Thomas Morrison, and Margaret Morrison.   Arthur was a graduate of Boston College and veteran of the US Air Force. He had a full career at MetLife, and loved spending time with his family. He enjoyed playing golf with friends at the Sky Meadow Country Club, and displayed an upbeat attitude and friendly demeanor to everyone he met. All services will be private.

The family of Arthur W. Farley, Jr. created this Life Tributes page to make it easy to share your memories.