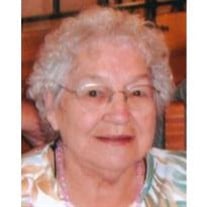 Anna “Milly” Dayton, 93, of Nashua, NH died Thursday June 21, 2012 at Greenbriar Terrace Care Center in Nashua, NH. Anna was born on February 23, 1919 in Amherst, Nova Scotia and was the daughter of the late Wilfred and Caroline (Savoie) Cormier and was also predeceased by her loving husband Benjamin Dayton; three brothers and seven sisters. Anna was active in many community clubs and organizations in both Chelsea and Nashua including serving as the president of the VFW Ladies Auxiliary in Chelsea. She enjoyed traveling extensively throughout the US by bus, and loved playing BINGO. Above all else, Anna enjoyed spending time with family, she will be missed by all that knew her. Anna is survived by a daughter, Carol Clark of Nashua, NH; a son, Joseph “Dick” Dayton of St. Petersburg, FL; two grandchildren, John R. Clark, Jr. and his wife Deborah of Hollis, NH and Cheryl Lavoie and her husband Gerald of Nashua, NH; three great-grandchildren, Carrie and Shawn Bourgeault, both of Nashua, NH and Ryan Lavoie of Nashua, NH and many nieces, nephews and dear friends. Visiting Hours will be held on Monday June 25th from 5-8pm in the DUMONT-SULLIVAN FUNERAL HOME, 50 FERRY ST., HUDSON. A Funeral Mass will be held on Tuesday June 26th at 10:30am in St. Joseph the Worker Parish, 777 West Hollis St., Nashua. ALL TO MEET AT CHURCH. Burial to follow in Woodlawn Cemetery, Everett, MA.

The family of Anna "Milly" Dayton created this Life Tributes page to make it easy to share your memories.